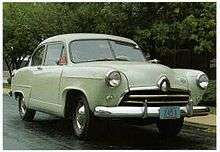 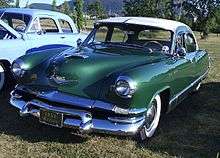 Kaiser Motors (formerly Kaiser-Frazer) Corporation made automobiles at Willow Run, Michigan, United States, from 1945 to 1953. In 1953, Kaiser merged with Willys-Overland to form Willys Motors Incorporated, moving its production operations to the Willys plant at Toledo, Ohio. The company changed its name to Kaiser Jeep Corporation in 1963.

Kaiser-Frazer Corporation came into being during early August, 1945 as a joint venture between the Henry J. Kaiser Company and Graham-Paige Motors Corporation. Henry J. Kaiser, a California-based industrialist & Joseph W. Frazer, CEO of Graham-Paige both wanted to get into the automobile business & pooled their resources and talents to make that wish come true.[1] Less than a year after Kaiser-Frazer's formation, the first Kaiser and Frazer branded automobiles were coming off a production line at the Willow Run MI. headquarters for both Kaiser-Frazer and Graham-Paige. By the end of 1946, over 11,000 cars (total Kaiser and Frazer) went out to dealers and distributors; many of them sold to retail owners.[2] During the summer of 1948, the 300,000th car came off the production line.[3] In 1950 Kaiser-Frazer began production of a compact car, the Henry J[4] and ended production of the Frazer automobile;[5] both makes were 1951 model year automobiles. In 1952 and 1953 Kaiser-Frazer provided Sears Roebuck & Co. with Allstate-branded automobiles that Sears sold through selected Sears Auto Centers; these cars, extensively based on the Henry J Kaiser-Frazer dealers were selling did appear in the Sears "wish books" but the car could not be purchased by mail order.[6] At the 1953 New York Auto Show, Kaiser-Frazer announced it would produce a fiberglass bodied sports car, called the Kaiser-Darrin-Frazer 161 (the car had a 161 cubic inch 6 cylinder engine & was designed by stylist Howard Darrin, who also did the 1947–48 Kaiser & Frazer as well as the 1951 Kaiser automobiles).[7] This vehicle went into production during January 1954 and was sold as the Kaiser-Darrin.[8] Production of the Allstate ended during 1953, the last Henry J automobiles were built in late 1953 as 1954 model year cars, the sports car was in production only during the 1954 model year and the last Kaisers were produced in America during the 1955 model year.[9] Close to 760,000 cars were produced, all makes and models between May 1946 and September 1955.[10]

While sales were initially strong because of a car-starved public, the company did not have the resources to survive long-term competition with GM, Ford, and Chrysler. The original Kaiser-Frazer design was distinctive and fresh but the company was unable to maintain the price point it needed for long-term success. Kaiser-Frazer was able to work out deals with General Motors not only to get the GM Hydra-Matic automatic transmissions but had a signed deal for detuned Rocket 88 engines from Oldsmobile with deliveries starting in the 1952 model year. The deal was contingent on Olds being able to expand its Lansing, MI engine production facility; that expansion was cancelled due to factory expansion restrictions put in place by the government due to military needs during the Korean War.[17] K-F had their own V-8 engine development program that ran through 1949 but, as the lead engineers on the team stated to the Society of Automotive Engineers (SAE) they found their work was leading down a "blind alley" and would not work as a production motor.[18] Frazer cars ended up suffering as a luxury and upper medium price make due to changing market conditions, as Hudson and Studebaker found out during the 1950s when similar situations befell them. The Henry J, while a well-meaning idea, but was hamstrung by various government requirements stemming from a re-capitalization loan the government made to the company in the fall of 1949.[19] Kaiser-Frazer labor agreements resulted in the company paying the highest wages of any American automaker and getting a productivity rate of only 60–65% in return.[20] Kaiser tried to get around its deficiencies with schemes like elaborate designer interiors with fancy dashboards and upholstery. A line of "Traveler" sedans with the trunk connected to the interior of the car were an improvised attempt at a station wagon.

At the end of 1955, the management team of the Henry J. Kaiser Company used Kaiser Motors Corporation to create a new holding company encompassing the various Kaiser industrial activities. Kaiser Motors' name was changed to Kaiser Industries Corporation, and functioned as a holding company for various Kaiser business holdings including Willys Motors Incorporated.[21]

U.S. production of Kaiser and Willys passenger cars ceased during the 1955 model year, but production of Willys Jeeps in Toledo, Ohio, continued. Kaiser continued automobile production in Argentina under the Industrias Kaiser Argentina (IKA) company established in Santa Isabel, Córdoba and Willys passenger cars moved to Brazil under the Willys-Overland do Brasil company, using the dies formerly employed in the U.S. well into the 1960s.

The company changed its name to Kaiser Jeep in 1963. By 1969, Kaiser Industries decided to leave the auto business, which was sold to American Motors American Motors Corporation (AMC) in 1970. As part of the transaction, Kaiser acquired a 22% interest in AMC, which it later divested. Included in the sale was the General Products Division, which Kaiser had purchased from Studebaker in 1964 as it prepared to leave the auto business itself. AMC renamed the division AM General, which still operates today, and is best known as the manufacturer of the Humvee, and civilian Hummer H1.