The Kaohsiung Mosque (Chinese: 高雄清真寺; pinyin: Gāoxióng Qīngzhēnsì) is a mosque in Lingya District, Kaohsiung, Taiwan. It is the second mosque to be built in Taiwan after Taipei Grand Mosque in Taipei.[6][7] 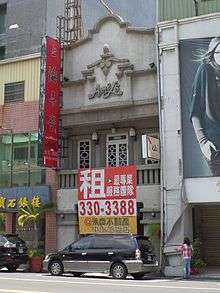 Kaohsiung Mosque was built in 1949 in Taiwan by Muslim nationalists after their defeat against the communists in the Chinese civil war. In the beginning, Muslim public officers worked with the Kuomintang government to suggest the construction of a new mosque in Taiwan and started to raise funds from January 1949. Initially, they rented a 270 square meters of space at 117 Wufu 4th (五福四) Road in Yancheng District as a temporary location.[8]

Due to the limited space available at 117 Wufu 4th Road, they moved to a 460 square meters Japanese wooden style building at 196 Linsen 1st (林森一) Road in Xinxing District in 1951. The main prayer hall area was 135 square meter.[2] With the growing number of Muslim worshipers, they started to raise funds for the new mosque. In October 1988, the land of the old mosque were sold and the money they received was used to finance the construction of the new mosque. 196 Linsen 1st Road now houses FarEasTone customer care service center.[9][10] 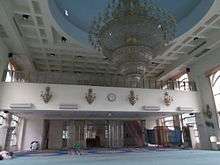 In February 1990, they finally moved the mosque to the current bigger site and better equipped building to accommodate their growing numbers of Muslims located at 11 Jianjun (建軍) Road in Lingya District. Construction started on 17 December 1990, completed in late December 1991 and it was opened on April 1992. 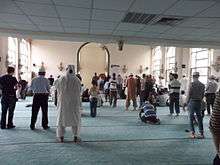 Kaohsiung Mosque is a three-story building that features a large Middle Eastern vault. The design of the prayer hall, nooks, corners and components of the buildings are based on traditional mosques in the Middle East. The building covers an area of 2,657 square meters.[2]

Beside the mosque there are some Halal restaurants owned by Muslim people.[12]

Kaohsiung Mosque is accessible within walking distance North from Weiwuying Station of the Kaohsiung MRT.