Katharine Lee Bates (August 12, 1859 – March 28, 1929) was an American songwriter. She is remembered as the author of the words to the anthem "America the Beautiful". She popularized "Mrs. Santa Claus" through her poem Goody Santa Claus on a Sleigh Ride (1889).

Bates was born in Falmouth, Massachusetts, the daughter of Congregational pastor William Bates and his wife, Cornelia Frances Lee. She graduated from Wellesley High School in 1874 and from Wellesley College with a B.A. in 1880. She taught at Natick High School during 1880–81 and at Dana Hall School from 1885 until 1889. She returned to Wellesley as an instructor, then an associate professor 1891–93 when she was awarded an M.A. and became full professor of English literature. She studied at Oxford University during 1890–91.[1] While teaching at Wellesley, she was elected a member of the newly formed Pi Gamma Mu honor society for the social sciences because of her interest in history and politics. 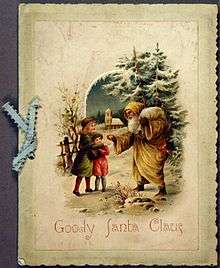 Cover of an early edition of Goody Santa Claus

Bates was a prolific author of many volumes of poetry, travel books, and children's books. She popularized Mrs. Claus in her poem Goody Santa Claus on a Sleigh Ride from the collection Sunshine and other Verses for Children (1889).

A lifelong, active Republican, Bates broke with the party to endorse Democratic presidential candidate John W. Davis in 1924 because of Republican opposition to American participation in the League of Nations. She said: "Though born and bred in the Republican camp, I cannot bear their betrayal of Mr. Wilson and their rejection of the League of Nations, our one hope of peace on earth."[3]

Bates never married. In 1910, when a colleague described "free-flying spinsters" as "fringe on the garment of life", Bates answered: "I always thought the fringe had the best of it. I don't think I mind not being woven in."[4]

Bates died in Wellesley, Massachusetts, on September 28, 1929, and is buried in Oak Grove Cemetery at Falmouth.

Bates lived in Wellesley with Katharine Coman, who was a history and political economy teacher and founder of the Wellesley College School Economics department. The pair lived together for twenty-five years until Coman's death in 1915.[6] In 1922, Bates published Yellow Clover: A Book of Remembrance, a collection of poems written "to or about my Friend" Katharine Coman, some of which had been published in Coman's lifetime.[7]

Some describe the couple as intimate lesbian partners,[8] citing as an example Bates' 1891 letter to Coman: "It was never very possible to leave Wellesley [for good], because so many love-anchors held me there, and it seemed least of all possible when I had just found the long-desired way to your dearest heart...Of course I want to come to you, very much as I want to come to Heaven."[9] Others contest the use of the term lesbian to describe such a "Boston marriage". Writes one: "We cannot say with certainty what sexual connotations these relationships conveyed. We do know that these relationships were deeply intellectual; they fostered verbal and physical expressions of love."[10]

The first draft of "America the Beautiful" was hastily jotted down in a notebook during the summer of 1893, which Bates spent teaching English at Colorado College in Colorado Springs, Colorado. Later she remembered:

One day some of the other teachers and I decided to go on a trip to 14,000-foot Pikes Peak. We hired a prairie wagon. Near the top we had to leave the wagon and go the rest of the way on mules. I was very tired. But when I saw the view, I felt great joy. All the wonder of America seemed displayed there, with the sea-like expanse.

The words to her only famous poem first appeared in print in The Congregationalist, a weekly journal, for Independence Day, 1895. The poem reached a wider audience when her revised version was printed in the Boston Evening Transcript on November 19, 1904. Her final expanded version was written in 1913. When a version appeared in her collection America the Beautiful, and Other Poems (1912), a reviewer in the New York Times wrote: "we intend no derogation to Miss Katharine Lee Bates when we say that she is a good minor poet."[11]

The Bates family home on Falmouth's Main Street is preserved by the Falmouth Historical Society. There is also a street named in her honor, "Katharine Lee Bates Road" in Falmouth. A plaque marks the site of the home where she lived as an adult on Centre Street in Newton, Massachusetts.

The Katharine Lee Bates Professorship was established at Wellesley shortly after her death.[13]

Bates was inducted into the Songwriters Hall of Fame in 1970.[14]