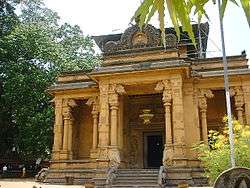 Kelaniya is a suburb of Colombo city in Western Province, Sri Lanka. It is known for the Buddhist temple built on the banks of the Kelani River, which runs through the suburb. It is also a religious center for veneration of the figure Vibhishana.

Kelaniya (Kalyani) is mentioned in Ramayana and in the Buddhist chronicle, the Mahawansa which states that the Gautama Buddha (5th century BC) visited the place, after which the dagaba of the temple was built.[1]

The suburb is also of historical importance as the capital of a provincial king Kelani Tissa (1st century BC) whose daughter, Viharamahadevi was the mother of king Dutugemunu the great, regarded as the most illustrious of the 186 or so kings of Sri Lanka between the 5th century BC and 1815.

Sri Lankan Buddhists believe that the Buddha visited Kelaniya in order to quell a quarrel between two Nāga leaders of two warring factions: Chulodara (literally "the small-bellied one") and Mahodara (literally "the big-bellied one"). They were quarrelling over a jewel-encrusted throne. After the Buddha showed them the futility of their quarrel they converted to Buddhism and together offered the throne to the Buddha. It is believed that the Dagaba (Sthupa or Buddhist temple) seen today was built with the throne as a relic inside. 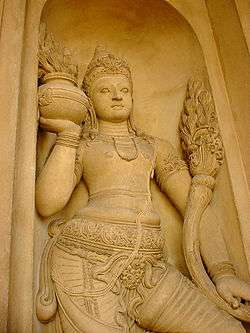 Kelaniya Raja Maha Vihara has become famous because of the beautiful paintings and sculpture by Solias Mendis depicting various events in the history of Sri Lanka. Thousands of Buddhists come to see the Buddhist pageant of Kelaniya, popularly referred to as Duruthu Maha Perahera of Kelaniya in the month of January every year.

According to Ramayana, After King Ravana’s death, Vibeeshana was coroneted as King of Lanka by Lakshmana at Kelaniya. There are murals enshrined outside the Buddhist temple depicting the crowning of Vibeeshana. The Kelani River is mentioned in the Valmiki Ramayana and Vibeeshana palace was said to be on the banks of this river. The reason Lakshmana crowned Vibeeshana, was because Rama had to return to India as he had to continue his self-exile of 14 years to honour the commitment to his father, King Dasarath of Ayodhya.

The A1 highway connecting Colombo with Kandy runs along this suburb. The Kelaniya Railway Station is located close to the Colombo Kandy Road and provides rail connections with the rest of the country.

The University of Kelaniya is situated at Kelaniya near the Colombo-Kandy Road.