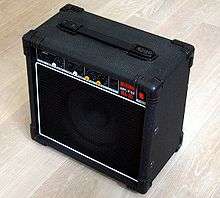 A small keyboard amplifier commonly used at a music studio

A keyboard amplifier is a device containing an audio amplifier and loudspeakers, or a type of public address system used with electronic keyboard instruments to make it sound louder, mainly for live performances on a stage or a concert hall, as well as small venues and music studio. Keyboard amplifiers used for the stage pianos, synthesizers, clonewheel organs and similar instruments, are distinct from other types of amplification systems due to the particular challenges associated with keyboards; namely, to provide solid low-frequency sound reproduction and crisp high-frequency sound with a relatively flat frequency response and low distortion.

It is typically a combination amplifier that contains a simple two, three, or four-channel mixer, a pre-amplifier for each channel, equalization controls (for modifying the bass and treble response), a power amplifier, a full-range speaker, and a horn, all in a single wooden speaker cabinet. Keyboard amplifiers have multiple inputs with independent volume controls, in contrast to bass amps and guitar amps, which often have a single input, because many keyboard players perform with multiple keyboards. For example, a keyboard player may perform with an electric piano, a clonewheel organ and a synth.

Two notable exceptions to the "low distortion" rule are keyboard amplifiers designed for the Hammond organ or clonewheel organs and amps used with electric pianos such as the Fender Rhodes. With organs used in blues or hard rock, performers often use the vintage Leslie speaker cabinet and modern recreations, which have a tube amplifier which is often turned up to add a warm, "growling" overdrive to the organ sound. With electric pianos used in a rock or funk band, natural tube overdrive is often added to the sound. 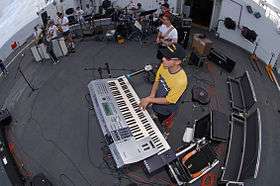 A US Navy keyboardist playing his Yamaha keyboard through a large Roland keyboard amp.

Since keyboards have a very wide range of pitches, keyboard amplifiers have to provide solid low-frequency sound reproduction and crisp high-frequency sound reproduction. This distinction affects the design of the loudspeakers, the speaker cabinet and the preamplifier and amplifier. They usually include tuned bass reflex ports or vents for increased efficiency at low frequencies. Since keyboard amplifiers have to be able to reproduce very high notes, they are often equipped with a horn.

While electric guitar amplifiers are typically designed to modify the tone of the guitar (e.g., by adding distortion and rolling off high frequencies), keyboard amplifiers intended for general use for a range of keyboard applications usually have very low distortion and extended, flat frequency response in both directions. The exception to this rule is keyboard amplifiers designed for the Hammond organ, such as the vintage Leslie speaker cabinet and modern recreations, which have a tube amplifier which is often turned up to add a warm, "growling" overdrive to the organ sound. Electric piano players in rock and funk also often seek to add natural tube overdrive to their sound.

Keyboard amplifiers often have an onboard three or four-channel mixer, so that multiple keyboards (e.g., a stage piano, synthesizer, and clonewheel organ) can be plugged into one amplifier and so that keyboardists can control the tone and level of several keyboards. In some genres, such as progressive rock, for example, keyboardists may perform with several synthesizers, electric pianos, and electro-mechanical keyboards. Keyboard amplifiers often have onboard reverb effects.

Most inexpensive to mid-priced amplifiers currently produced are based on semiconductor (solid-state) circuits. Solid-state amplifiers vary in output power, functionality, size, price, and sound quality in a wide range, from practice amplifiers to professional models. The smallest, most inexpensive practice amplifiers may have only two channels with volume controls and one or two tone controls. Home practice amps have from 20 to 30 watts of power, often through an 8" or 10" speaker. Small keyboard amplifiers designed for small band rehearsals have 50 to 75 watts, a 12-inch speaker, and possibly a tweeter. Large keyboard amplifiers designed for shows in large clubs or halls have 200 to 300 watts of power, a 12-inch or 15-inch speaker (or two 12-inch speakers), and a horn-loaded tweeter.

Some keyboard amps may be equipped with a compressor or limiter to protect the speaker from damage when the amplifier is being used at high volume levels. Some keyboard amps have an extension speaker jack, which enables the amp to be connected to a second speaker cabinet.

In small venues such as a coffeehouse or small bar, a keyboardist might not connect her keyboard amp up to the PA system, and just use the sound of the keyboard amp to provide the keyboard sound for the venue. At most mid-sized venues and all large venues, such as stadiums, the signal from the keyboard amp's pre-amp out jack, DI out jack and/or the microphoned sound from the speaker and horn are fed to the mixing board and then amplified with the PA system or sound reinforcement system. In cases where a keyboardist has a rotating Leslie speaker, microphones are always used to pick up the sound, rather than taking an electronic signal from the amp.

Keyboardists who want powerful low end may use a subwoofer cabinet designed for a PA system. Subwoofers can only produce frequencies up to about 150 or 200 Hz, so a subwoofer cabinet must be paired with a full range speaker to obtain the full tonal range of an electric piano or organ. Keyboard players who use subwoofers for on-stage monitoring include electric organ players who use bass pedal keyboards (which go down to a low "C" which is about 33 Hz) and synth bass players who play rumbling sub-bass parts that go as low as 18 Hz. Of all of the keyboard instruments that are amplified onstage, synthesizers can produce some of the lowest pitches, because unlike a traditional electric piano or electric organ, which have as their lowest notes a low "A" and a low "C", respectively, a synth does not have a fixed lowest octave. A synth player can add lower octaves to a patch by pressing an "octave down" button, which can produce pitches that are at the limits of human hearing.

Several concert sound subwoofer manufacturers suggest that their subs can be used for instrument amplification. Meyer Sound suggests that its 650-R2 Concert Series Subwoofer, a 14-cubic-foot (0.40 m3) enclosure with two 18-inch (460 mm) drivers, can be used for bass instrument amplification.[1] While performers who use concert sound subwoofers for onstage monitoring may like the powerful sub-bass sound that they get onstage, sound engineers may find the use of large subwoofers (e.g., two 18″ drivers) for onstage instrument monitoring to be problematic, because it may interfere with the “Front of House” sub-bass sound. 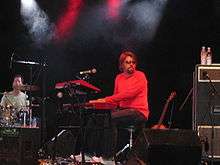 A keyboardist playing a live show with a big Leslie cabinet (visible to his right).

The Leslie speaker is a specially constructed amplifier/loudspeaker cabinet used to create special audio effects using the Doppler effect by rotating the speakers or a sound-directing duct. Named after its inventor, Donald Leslie, it is particularly associated with the Hammond organ but is used with a variety of instruments and sometimes with vocals. The Hammond/Leslie combination has become a key element of the sound in many genres of music, including early heavy metal music (e.g., Deep Purple), blues, jazz organ trios and some rock genres. The Leslie Speaker and the Hammond Organ brands are currently owned by Suzuki Musical Instrument Corporation. Due to the large size and weight of the Leslie Speaker, some keyboardists use a small effects unit instead, and plug the unit into a regular keyboard amp. The most expensive rotating speaker effect units can create a realistic-sounding recreation of the real Leslie speaker system.

Another approach used by some keyboard players is to use a small PA system for their keyboards. This approach can work well, because small PA systems typically have six to eight inputs, which can accommodate a large keyboard setup with multiple keyboards (electric piano, Hammond organ, synth, etc.). The other benefit of using a PA system is that they use full-range speakers which contain a woofer and a tweeter, which are designed to reproduce the full range of sounds, from rumbling bass notes to piercing high notes. Some keyboard players use powered monitor speakers with their keyboards. While these speakers have full-range woofers and tweeters and they are robust enough for high-volume music, some models are not designed to be portable, and so they lack carrying handles and metal-protected corners. These types of powered monitor speakers are more suitable for a fixed keyboard setup in a home studio, recording studio or music school.

Peavey's smallest keyboard amp is the KB 1. It has 20 watts, an 8" speaker, and "2 separate channels with a 2-band EQ per channel and a headphone out." [2] This amp would be suitable for in-home practice. The next keyboard amp in the Peavey line is the KB 2. It has one ten-inch speaker "four separate channels, including a mic input on channel 3 and a monitor input on channel 4", a "2-band EQ per channel, headphone out, FX send/return, and balanced XLR out", and it is rated at 40 watts.[3] This amp would be a good model for at-home practice. It could be used for a rehearsal for a quieter genre of music, such as folk. The KB 3 has 60 watts, a "12" speaker with tweeter...[,] 3 separate channels each have 2-band EQ and Channel 1 has mic input." There is also a balanced XLR main out, an effects send/return and a "headphone out with level control."[4] Peavey's KB 4 puts out 75 watts through a 15-inch speaker. The onboard mixer has a "2-band EQ and main effects send/return", the "Mic/Line channel has 3-band EQ and effects send/return plus monitor input with level control and assign, and a headphone out with level control." [5] This amp would be suitable for rehearsal or small venue shows (e.g., a coffeehouse).

The 50 KW has 50 watts of power, a 10" woofer and a 3.75" tweeter. It has "2-channel operation", with "Channel 1 optimized for microphones with an XLR and a 1/4" input" and "Channel 2 optimized for line level and keyboard sources with 2 phone jack inputs and 2 RCA inputs"[11] The 50 KW is wedge-shaped, so it can be used as a monitor for a seated keyboardist. The 200 KB delivers 200 watts through a 15" woofer and a horn tweeter. It is a four-channel amp. Channels 1 and two have an XLR and TRS phone jack. "Channel 3 has a TRS phone jack input", and "Channel 4 has one TRS phone jack and 2 RCA jacks" There are treble and bass tone controls for channels 1 and 2.[12] This amp would be suitable for mid-to large-sized shows.