The monument in 2011, the building in the background is sometimes dubbed the "computer case"

Keyboard Monument is an outdoor sculpture featuring the QWERTY keyboard. It is located in the Russian city of Yekaterinburg and is popular among tourists.[1]

It was created by Anatoly Vyatkin and installed on October 5, 2005 on the embankment of the Iset River in the city center.[1][2]

The landmark depicts an IBM PC compatible Cyrillic computer keyboard increased in scale 30:1 (the area covered by the monument being 16 × 4 m), with 86 concrete keys, each weighing up to 1,000 pounds.[3]

The keyboard attracts many visitors to the city and is today considered one of its top sights. It is also referred to as "one of the miracles of Russia" by some researchers.[4] Niklaus Wirth, Pascal programming language designer, evaluated the object while it was being constructed and found it to be fascinating.[5]

Keys F1, F2, F3, and Y were once stolen and in 2011 were rebuilt. Thanks to the keyboard, new city legends came to life. Rumor has it that if you "type" your wish on the keyboard and then jump on Enter, your wish will come true. If you want to reboot your life, press Ctrl, Alt, Del. [6] 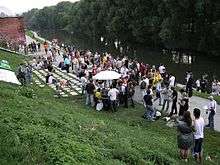 Regular celebrations are held near the object. Among them the annual internationally recognized Sysadmin Day on the last Friday in July. Before 2010 Ekaterinburg technicians were gathering at separate places, and since 2010 Ekaterinburg authorities granted official permission for the event to be held near the Keyboard Monument with support from IT companies.[7] There are "sysadmin competitions" between participants: they throw defunct PC mice to reach maximum distance and also throw such mice (with their "tails" cut out) within an empty distant computer case used as basket. Additionally, they powerlift a bundle of unused HDDs.[8] In 2016 during such an event a memorial plaque was set up at the monument to honor Eugene Zorin, the Ekaterinburg FIDO and Internet pioneer who died recently.[9] In the end of April, the "Keyboard Subbotniks" are also held, when people are cleaning and re-painting the monument, and "sports competitions" also take place.