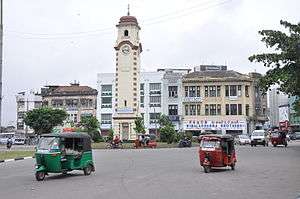 The clock tower also provided a working water fountain, but this no longer functions. The plate on the clock tower carries the inscription: "This clock tower and fountain was erected to the memory of Framjee Bhikhajee Khan by his sons Bhikhajee and Munchershaw Framjee Khan as a token of affectionate gratitude and dedicated through the Municipal Council to the citizens of Colombo on the fourth day of January 1923, the 45th anniversary of his death."

The Tower is roughly four storeys high and is situated on a landscaped roundabout that marks the entrance to the famous market.

This article is issued from Wikipedia - version of the 9/12/2014. The text is available under the Creative Commons Attribution/Share Alike but additional terms may apply for the media files.