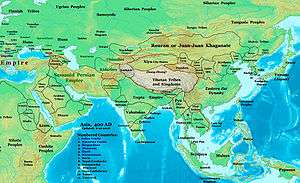 Asia in 400 AD, showing Kidarite lands and their neighbors.

The Kidarite (Chinese: 寄多羅 Jiduolo[1]) were a dynasty of the "Ki" clan named after their ruler Kidara. They were part of the complex of Iranian-speaking tribes known collectively as Xionites or "Hunas".

During the 4th-5th century they established the Kidarite kingdom.

The Kidarites, a nomadic clan, are supposed to have originated in China and arrived in Bactria with the great migrations of the second half of the 4th century.

When Shi Le established the Later Zhao state, it is thought that many of the Uar (Chinese 滑 Huá) fled (c. 320 CE) from the area around Pingyang (平陽; modern Linfen, Shanxi) and fled west along the Silk Road. This put pressure on the Xionites, who increasingly encroached upon Khorasan and the frontiers of the Kushan state.

The Kidarite king Grumbat mentioned by Ammianus Marcellinus was a cause of much concern to the Persians. Between 353 AD and 358 AD, the Xionites under Grumbat attacked in the eastern frontiers of Shapur II's empire along with other nomad tribes. After a prolonged struggle they were forced to conclude a peace, and their king Grumbat accompanied Shapur II in the war against the Romans. Victories of the Xionites during their campaigns in the Eastern Caspian lands are described by Ammianus Marcellinus: Grumbates Chionitarum rex novus aetate quidem media rugosisque membris sed mente quadam grandifica multisque victoriarum insignibus nobilis. ("Grumbates, the new king of the Xionites, while he was middle aged, and his limbs were wrinkled, he was endowed with a mind that acted grandly, and was famous for his many, significant victories." –Ammianus Marcellinus, 18.6.22.)

The southern or "Red" Kidarite vassals to the Kushans in the North-Western Indus valley became known as Kermikhiones.

A "Kidarite dynasty", south of the Oxus, was at war with the Sassanids in the fifth century. Peroz I fought Kidara and then his son Kungas, forcing Kungas to leave Bactria. They entered Kabul and replaced the last of the Kushan Empire rulers. However, the Kidarites in turn were soon overwhelmed by the Hephthalites.[2]

According to the Chinese sources Kidarites appeared in Kazakhstan and Bactria in 4th century and were branch of the Little Yuezhi. Some of them inherited the Kushan Empire and were called little Kushans.[3][4] Kidarites were also called Red Huns,[5][6] they practiced artificial cranial deformation[7] and were displayed on Sogdian coins as archers riding on the reverse.[8]

The Kidarite kingdom was created either in the second half of the 4th century, or in the twenties of the 5th century.

The only 4th century evidence are gold coins discovered in Balkh dating from c. 380, where 'Kidara' is usually interpreted in a legend in the Bactrian language. Most numismatic specialists favor this idea. All the other data we currently have on the Kidarite kingdom are from Chinese and Byzantine sources from the middle of the 5th century.

They may have risen to power during the 420s in Northern Afghanistan before conquering Peshawar and part of northwest India, then turning north to conquer Sogdiana in the 440s, before being cut from their Bactrian nomadic roots by the rise of the Hephthalites in the 450s. Many small Kidarite kingdoms seems to have survived in northwest India up to the conquest by the Hephthalites during the last quarter of the 5th century are known through their coinage.

The Kidarites are the last dynasty to regard themselves (on the legend of their coins) as the inheritors of the Kushan empire, which had disappeared as an independent entity two centuries earlier.

The Kidarites were the first "Hunas" to bother India. Indian records note that the Hūna had established themselves in modern Afghanistan and the North-West Frontier Province in present-day Pakistan by the first half of the 5th century, and the Gupta emperor Skandagupta had repelled a Hūna invasion in 455.