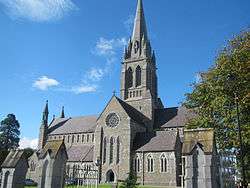 St. Mary's Cathedral (1842-1855) was designed by the renowned English Architect Augustus Welby Pugin and is considered to be one of the most important and best Gothic Revival churches of the nineteenth century in Ireland. The spire and nave were completed by the Irish Architects Ashlin and Coleman of Dublin. The interior decorations were designed by J.J. McCarthy.

The interior was severely damaged when the interior plaster was removed in the 1973 renovation by D.J. Kennedy.

The width of the nave was based on the medieval models to be found throughout Ireland and England. The west end is very Irish in character, with three tall lancet windows and a very low entrance door beneath.

The stonework used is an attractive mixture of brown and grey stone. The siting of the church is more like the siting of a priory than the siting of a cathedral, as the cathedral stands in a huge field instead of in the middle of the original settlement of Killarney.

This article is issued from Wikipedia - version of the 7/20/2015. The text is available under the Creative Commons Attribution/Share Alike but additional terms may apply for the media files.