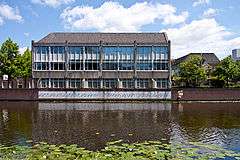 The KITLV. On the wall below the building is a poem in the Buginese language, one of the Wall poems in Leiden. 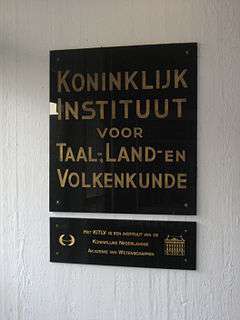 The KITLV/Royal Netherlands Institute of Southeast Asian and Caribbean Studies (Dutch: Koninklijk Instituut voor Taal-, Land- en Volkenkunde, abbreviated: KITLV) at Leiden was founded in 1851. Its objective is the advancement of the study of the anthropology, linguistics, social sciences, and history of Southeast Asia, the Pacific Area, and the Caribbean. Special emphasis is laid on the former Dutch colonies of Indonesia, Suriname, and the Netherlands Antilles and Aruba. Its unique collection of books, manuscripts, prints and photographs attracts visiting scholars from all over the world. On July 1, 2014, the management of the collection was taken over by Leiden University Libraries.

In 1969 a KITLV-department was started by Hans Ras in Jakarta, as a part of an agreement with Lembaga Ilmu Pengetahuan Indonesia (LIPI, the Indonesian Institute for Sciences). Here, publications from Indonesia, Malaysia and Singapore are bought and given a place in the library of the institute, publications of the institute are sold, and original scientific works in the Dutch language are translated into Indonesian. The KITLV-Jakarta office is, since July 1, 2014, part of Leiden University Libraries.