Kristen Schaal (/ʃɑːl/;[3] born January 24, 1978) is an American actress, voice artist, writer, and comedian. She is best known for her roles as Mel on the HBO series Flight of the Conchords, Louise Belcher on FOX animated comedy Bob's Burgers, and Mabel Pines on Gravity Falls. Other notable roles include her appearances as a commentator on The Daily Show, Amanda Simmons on The Hotwives of Orlando, Hazel Wassername on 30 Rock, Victoria Best on WordGirl, Trixie from the Toy Story franchise, and Anne on Wilfred. Since 2015, she has co-starred alongside Will Forte in the Fox comedy The Last Man on Earth, playing the role of Carol.

Schaal was born in Longmont, Colorado, to a Lutheran family of Dutch ancestry.[4] She was raised on her family's cattle farm, in a rural area near Boulder.[4] Her father is a construction worker and her mother is a secretary.[5] She has a brother, David, who is three years older.[5] She graduated from Northwestern University and then moved to New York in 2000 to pursue a comedy career. In 2005, she had her first break when she was included in New York magazine's article "The Ten Funniest New Yorkers You've Never Heard Of".[6] 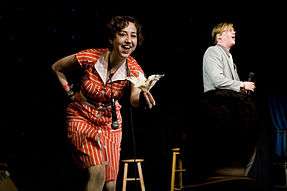 In 2006, Schaal performed at the 2006 HBO US Comedy Arts Festival in Aspen, where she won the award for "Best Alternative Comedian". She was also the winner of the second annual Andy Kaufman Award (hosted by the New York Comedy Festival), Best Female Stand-up at the 2006 Nightlife Awards in New York City, and "Best Female Stand Up Comedian" at the 2007 ECNY Awards.[7] At the 2008 Melbourne International Comedy Festival, she won the Barry Award for her show Kristen Schaal As You Have Probably Never Seen Her Before, tying with Nina Conti.[8] Also in 2006, Schaal appeared on the first season of the Comedy Central show Live at Gotham.[9] She co-hosts the weekly variety show Hot Tub in Los Angeles, which was voted “Best Variety Show of 2005” by Time-Out New York’s readers poll. She also performs at the Peoples Improv Theater on the improv team, "Big Black Car", which was awarded best improv troupe of 2005 at the Emerging Comics of New York awards. She is a founding member of the theatre company The Striking Viking Story Pirates, which adapts stories by children into sketches and songs.

Schaal performed live at the Edinburgh Fringe 2007 in Scotland, where she was one of six acts (chosen from over two hundred American productions at the Fringe) requested to perform at the US Consul General-sponsored "Fringe USA" Showcase.

On her return to the Edinburgh Fringe Festival in August 2008, Schaal was nominated for the If.comedy award for Kristen Schaal And Kurt Braunohler: Double Down Hearts.[10]

Schaal has also performed at the Royal Albert Hall, London, as part of The Secret Policeman's Ball 2008 in aid of Amnesty International, and at the Bonnaroo 2009 music festival. In 2010, Schaal appeared as a stand-up comic on John Oliver's New York Stand Up Show and at the Solid Sound Festival at the Massachusetts Museum of Contemporary Art.

Schaal at the Brooklyn Book Festival (2010)

Schaal rose to national attention for her role on HBO's Flight of the Conchords as the stalker-fan Mel, a role which earned her an Ewwy nomination for Best Supporting Actress in a Comedy Series in 2009. She was also a credited consultant and writer for Season 11 of South Park, appeared on the BBC's Never Mind the Buzzcocks and played the boss in Fuse's mockumentary The Intern. She made her first appearance as a "special commentator" on Comedy Central's The Daily Show on March 13, 2008, often presented in recurring appearances as its news team's "Senior Women's Issues Correspondent". On April 13, 2008, she made an appearance on Good News Week during the Melbourne International Comedy Festival and in October 2008 she appeared in Amnesty International's The Secret Policeman's Ball 2008.

Her other film and television credits include Kate and Leopold, Aqua Teen Hunger Force, Snake 'n' Bacon, Norbit, Get Him to the Greek, Conviction, Cheap Seats, Freak Show, Cirque du Freak: The Vampire's Assistant, Adam and Steve, The Goods: Live Hard, Sell Hard, Delirious, Australian show Good News Week, Law & Order: Special Victims Unit, Law & Order: Criminal Intent, The Education of Max Bickford, Comedy Central's Contest Searchlight, Ugly Betty, How I Met Your Mother, MTV's Human Giant and Mad Men. She was also a contributor to the sketch/music series The Nighttime Clap on the Fuse music network. She also appeared on Fuse's original comedy series The P.A. Schaal appeared in two TV pilots written and directed by Jersey City comedian Dan McNamara -- The Calderons[11] and Redeeming Rainbow,[12] both of which were screened as official selections at the 2006 and 2007 New York Television Festivals. She was also in television commercials for Wendy's, RadioShack, and Starburst. She made an appearance, in April 2008, on the IFC sketch comedy show The Whitest Kids U' Know. On April 3, 2009 she taped an episode of Comedy Central Presents.[13] In 2010, she added her voice to the PBS Kids GO! series WordGirl as Victoria Best, a child prodigy whose parents taught her to be the best at everything that she does.[14] Schaal voiced 12-year-old Mabel Pines on Disney Channel's Gravity Falls. She currently voices the character Louise on the FOX Network series Bob's Burgers.

She also stars in A. D. Miles' MyDamnChannel.com series Horrible People. In October 2008, Schaal appeared in an episode of Spicks and Specks. On June 10, 2009, Schaal broadcast her first radio show, High Five!!, on Sirius XM Radio's 'RawDog' channel with co-host Kurt Braunohler.[15] She played Gertha Teeth in the 2009 movie The Vampire's Assistant. Schaal stars in her own web series, Penelope Princess of Pets, one episode of which doubled as the video for the New Pornographers' "Mutiny, I Promise You".[16] She voiced Trixie the Triceratops in Toy Story 3 and Pumpkin Witch and Palace Witch in Shrek Forever After.[17] She was also in the music video for Joey Ramone's "New York City". She also guest starred in the Modern Family episode "Fifteen Percent", as well as the music video for "Conversation 16" by The National. Schaal guest starred on the MC Frontalot album Solved. She was featured with Kurt Braunohler on the Radiolab episode "Loops".[18] Schaal was in a commercial for the Xperia Play version of Minecraft.

Schaal guest starred on The Simpsons May 8, 2011 episode "Homer Scissorhands" in which she plays Taffy, a love interest of Milhouse. She is incorrectly listed in the credits as "Kristen Schall". This prompted Simpsons writers to issue her a unique apology on the next week's episode in which Bart's chalkboard gag in the intro to the show states "It’s Kristen Schaal, not Kristen Schall." Schaal also appeared in a music video for Weird Al Yankovic's 2014 song "Tacky", a parody of Pharrell Williams's "Happy".

In 2014, Schaal co-starred alongside Casey Wilson, Danielle Schneider, Tymberlee Hill, Andrea Savage, and Angela Kinsey in the first season of the Hulu original series The Hotwives of Orlando. She is currently co-starring alongside Will Forte in the FOX comedy The Last Man on Earth, which premiered on March 1, 2015.

Schaal appears in A Walk in the Woods (2015) as hiker Mary Ellen.

Schaal wrote a book of humor, The Sexy Book of Sexy Sex, with her husband, former Daily Show writer Rich Blomquist. It was published in July 2010 by Chronicle Books.[1] She originally intended for them to write the book under pseudonyms, "because I don't want anyone to imagine me doing those things,"[20] but realized it would be harder to promote the book without using their real names.