For other uses, see Chartreuse. 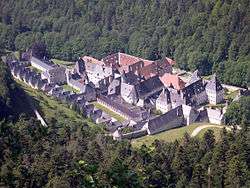 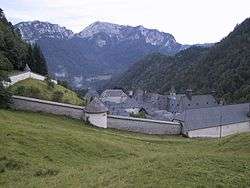 Grande Chartreuse is situated in a remote mountain valley.

Grande Chartreuse (French: [ɡʁɑ̃d ʃaʁtʁøːz]) is the head monastery of the Carthusian religious order. It is located in the Chartreuse Mountains, north of the city of Grenoble, in the commune of Saint-Pierre-de-Chartreuse (Isère), France. Originally, the château belonged to the See of Grenoble. In 1084, Saint Hugh gave it to hermit Saint Bruno and his followers who founded the Carthusian Order.

Today, visitors are not permitted at Grand Chartreuse, and motor vehicles are prohibited on the surrounding roads. However, a museum of the Carthusian order and the lives of its monks and nuns stands about two kilometers away.

The order is supported by the sales of Chartreuse liqueur which has been popular in France and later around the world since the early 18th century.

English poet Matthew Arnold wrote one of his finest poems, Stanzas from the Grande Chartreuse, while briefly staying at the monastery around 1850.[1] The quiet, serenity, and monastic calm became, for him, the sussurrations of a dying world which contrasted with what he saw as the violent emerging age of machinery. Grand Chartreuse was also described by William Wordsworth's in his 1792 Descriptive Sketches (lines 53-73), and in the 1850 revision of The Prelude, Book VI (lines 416-18), (Wordsworth visited the monastery in 1790, but he describes the 1792 expulsion of the monks by French forces); and John Ruskin's Praeterita.

Following the establishment of the Association Law of 1901 and its interpretation that effectively banned religious associations en masse, many notable religious institutions across France, including Grand Chartreuse, were closed by the French government.[2] The monks found refuge in Italy until 1929,[3] but returned in 1940 when the Grande Chartreuse was reopened by the Philippe Pétain regime.[4]

At the end of World War II, the Grand Chartreuse was used as a hospital by the Allied Forces.

A documentary film about the monastery entitled Into Great Silence, directed by Philip Gröning, received acclaim on the film festival circuit following its release in 2005.