La Libre Belgique (French: [la libʁ bɛlʒik]; literally, "The Free Belgium"), now sold under the name La Libre, is a French language daily newspaper in Belgium. It is seen as roughly equivalent to De Standaard in Flanders. The paper was originally pro-catholic, but it is now often critical about the Catholic Church. Along with another high circulation French-speaking newspaper Le Soir, it dominates the market in Wallonia and Brussels. 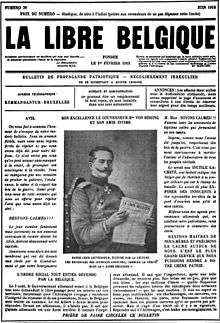 La Libre Belgique originated as Le Patriot in 1884 and had a pro-Catholic stance.[1] It was renamed La Libre Belgique and was published as part of the underground press in February 1915 during the German occupation of Belgium during World War I.[1][2] The publishers were the brothers Louis and Victor Jourdain who had been active in the world of newspaper publishing before the war. Hence its name which was at the same time an allusion to the collaborationist paper La Belgique. Several weeks before the end of the hostilities, both of the Jourdain brothers died of natural causes. Their work was continued by Victor’s two sons Joseph and Paul Jourdain.

The newspaper was also published secretly during World War II in a number of unofficial editions.[3] Until 1999 the paper had a strong Catholic stance and has a centrist leaning.[2]

La Libre is published six times per week (from Monday to Saturday) by the IPM publishing group[4][5] and has its headquarters in Brussels.[2] The current editor in chief is Vincent Slits. The online edition of the paper was started in 2001.[6] The paper has been published in tabloid format since 2002.[2][6]

La Libre was noted widely as one of the papers involved in a feud with Google relating to which content that could be linked and cached by Google. In July 2011, the paper was totally removed from Google News and Google's normal web search.

During its existence as an underground newspaper during World War II, La Libre Belgique was 40,000 copies in summer 1941.[7] In 1959 the paper reached a record circulation of 190,000 copies.

Aspects of the newspaper's history reflecting the Belgian Resistance appeared in the 1942 feature film Uncensored and the 1941 documentary short Out of Darkness, part of The Passing Parade series.