A granddaughter of Henry VIII's sister Mary, she emerged as a prospective successor to her cousin, Elizabeth I of England, before incurring Queen Elizabeth's wrath by secretly marrying Edward Seymour, 1st Earl of Hertford. Arrested after the Queen was informed of their clandestine marriage, Catherine (as Lady Hertford) lived in captivity until her death, having borne two sons in the Tower of London.

Family and claim to the Throne

Through their grandmother, the Grey sisters had a close claim in the line of succession to the English throne. They were preceded in the line of succession only by Henry VIII's three children – Prince Edward, Lady Mary and Lady Elizabeth – and the descendants of Princess Margaret, the elder daughter of Henry VII and Queen Consort of Scotland, after 1542 represented by Mary, Queen of Scots. However, Henry VIII had excluded the Scottish regal line from the English succession in his Will, placing the Grey sisters next-in-line after his own children.[2]

In 1553, as King Edward VI was dying, the King and his Chief Minister, John Dudley, 1st Duke of Northumberland, planned to exclude his sister Mary Tudor from the succession in favour of Catherine's elder sister, Lady Jane Grey. According to the Letters Patent of 21 June 1553, Lady Catherine was to be second in the line of succession behind her sister and heirs-male.[3] Lady Jane had been married to Northumberland's son, Lord Guildford Dudley, on 25 May 1553. On the same occasion, Lady Catherine was married to Henry, Lord Herbert heir apparent to William Herbert, 1st Earl of Pembroke at Durham House. After the wedding, Catherine (now Lady Herbert) went to live with her husband at Baynard's Castle beside the Thames;[4] Catherine Grey had been betrothed to Lord Herbert sometime before August 1552.[5] When Lady Jane's accession to the throne failed due to lack of popular support, Henry's father sought to distance himself from the Grey family by separating his son from Lady Catherine and seeking the annulment of the marriage;[6] Lord Pembroke achieved this in 1554 when Archbishop Cranmer declared the marital union as having never been consummated.[7] Meanwhile, her sister Lady Jane Grey and her father the Duke of Suffolk had been executed in February 1554 after the suppression of Wyatt's Rebellion.

During the first phase of Queen Mary's reign, Lady Catherine was senior heir-in-line to the throne as Mary was yet unmarried and her younger sister Elizabeth was regarded as illegitimate.[8] Demoted when Elizabeth was declared heir, Lady Catherine's claim came to the fore again when Queen Elizabeth acceded to the English throne in November 1558. At one point the Queen was apparently contemplating Lady Catherine Grey as a potential Protestant heir, with rumours of a possible adoption, but any such development was terminated upon Lady Catherine's clandestine marriage to Lord Hertford.

One of Lady Catherine's friends, Lady Jane Seymour, daughter of the Duke of Somerset, introduced her brother, Edward Seymour, 1st Earl of Hertford to Lady Catherine Grey (so restyled after the annulment of her first marriage). Without royal assent, the two were married in December 1560 during a secret ceremony at Lord Hertford's house in Cannon Row, where Lady Jane Seymour was the sole witness.

After learning this, the Queen despatched Lord Hertford with Thomas Cecil, eldest son of Sir William Cecil, on a grand tour across Europe "for the improvement of their education". The Earl of Hertford provided his wife with a document that would, in the event of his death, enable her to prove the marriage and inherit his property,[9] but apparently Catherine lost the document. Thus, after Lady Jane Seymour died of tuberculosis in 1561, Catherine was unable to prove that they had ever been married.

Catherine, Lady Hertford, concealed the marriage from everyone for months, even after she became pregnant; in her eighth month of pregnancy and on progress with the royal court to Ipswich, she decided to ask someone to plead for her with the Queen. She first confided in Bess of Hardwick, who refused to listen to Catherine and berated her for implicating her. Catherine then went to her brother-in-law, Robert Dudley. Visiting his bedroom in the middle of the night, she explained her dilemma. As Dudley's room adjoined the Queen's chambers, he was afraid they might be overheard or that he might be caught with a visibly pregnant woman at his bedside, and tried to get rid of Catherine as soon as he could. The next day he told Elizabeth everything he knew regarding Catherine and her pregnancy.[10] 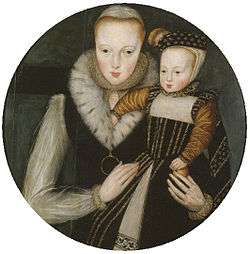 Queen Elizabeth was infuriated that her cousin had married without her knowledge or consent. The marriage also upset Anglo-Scottish diplomacy, as the possibility of a union between Lady Catherine and the Earl of Arran, a young and unstable nobleman with a strong claim to the Scottish throne, had thereby been removed as an option.[11] The Queen also disapproved of her choice of husband and, still unmarried, also feared that Catherine's ability to bear male offspring could possibly facilitate a rebellion in support of Catherine as Queen.[12] To Catherine's misfortune, her claim to the throne was at the time argued by a book written by John Hales.[13]

Queen Elizabeth imprisoned Lady Catherine in the Tower of London, where Edward Seymour (Lord Hertford) was sent to join her on his return to England. Bess of Hardwick was also imprisoned, as Elizabeth had become convinced not without reason that the marriage was part of a wider conspiracy against the Crown.[14] Sir Edward Warner, Lieutenant of The Tower, permitted secret visits between Catherine and Edward. Warner reported that the furnishings of Catherine's room, which were provided from the Royal Wardrobe in the Tower, had been damaged by her pet monkey and dogs.[15] While imprisoned in the Tower, Catherine gave birth to two sons:

In 1562, the marriage was annulled and the Seymours were censured as fornicators for "carnal copulation" by the Archbishop of Canterbury.[21] This rendered the children illegitimate and thereby ineligible as successors to the throne. Nonetheless, this did not stop their being courted as potential heirs to the Crown.

After the birth of her second child in 1563, the enraged Queen ordered Catherine's permanent separation from her husband and younger son. Catherine was removed to the care of her uncle, Sir John Grey, at Pirgo. She stayed there until November 1564, when she was transferred to the charge of Sir William Petre. For two years she was in his custody, and probably resided at Ingatestone Hall; then she was removed to the care of Sir John Wentworth (a kinsman of Petre's first wife) at Gosfield Hall, and after seventeen months' confinement there was taken to Cockfield Hall, Yoxford in Suffolk.

There, Lady Catherine died fourteen days later on 26 January 1568 at the age of twenty-seven of consumption.[22] She was interred at the Cockfield Chapel in Yoxford Church, Suffolk, before her body was moved to Salisbury Cathedral to be buried alongside her husband.[23]