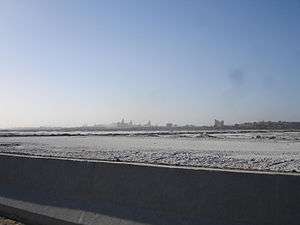 It is separated from the Mediterranean Sea by the narrow isthmus on which the city of Alexandria was built. The lake shore is home to fisheries and saltworks. As far back as the early 1900's, it was documented that salt was being refined from the western part of the lake.[3] Some of the marshy areas around the lake have been reclaimed for new building as the city grows and how to manage the pollution that goes into the lake has been considered.[4]

According to some records, a nome by the same name (ancient name: Mareotis) was located on the shores of this lake. [5]

The name derives from Mareotis or Marea, the name of the lake in ancient times.[1]

The fish species Nile perch live in the lake, although it principally needs fresh water to live in, and the lake contains some salt. In 1939, A small lake, called the Nozha Hydrodrome was "isolated from Lake Mariout" and this allowed for the Nile perch to flourish there.[2]

In 2015, a steel resembling the Rosetta Stone and dating back some 2,200 years, was discovered in ancient ruins called Taposiris Magna Temple site at Lake Mariout. Measuring 41 inches (105 cm) by 25.6 inches (65 cm) by 7 inches (18 cm) its message commemorates two Ptolemaic pharaohs and Cleopatra I. There are ancient tombs located on the shores of the lake.[6]