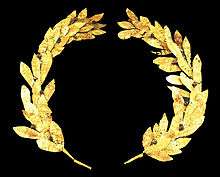 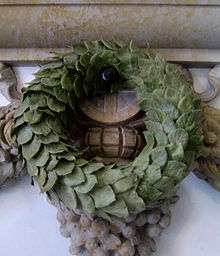 A laurel wreath decorating a memorial at the Folketing, the national parliament of Denmark.

A laurel wreath is a circular wreath made of interlocking branches and leaves of the bay laurel (Laurus nobilis), an aromatic broadleaf evergreen, or later from spineless butcher's broom (Ruscus hypoglossum) or cherry laurel (Prunus laurocerasus). In Greek mythology, Apollo is represented wearing a laurel wreath on his head. In ancient Greece wreaths were awarded to victors, both in athletic competitions, including the ancient Olympics made of wild olive-tree known as "kotinos" (κότινος),[1] (sc. at Olympia) and in poetic meets; in Rome they were symbols of martial victory, crowning a successful commander during his triumph. Whereas ancient laurel wreaths are most often depicted as a horseshoe shape, modern versions are usually complete rings.

In common modern idiomatic usage it refers to a victory. The expression "resting on one's laurels" refers to someone relying entirely on long-past successes for continued fame or recognition, where to "look to one's laurels" means to be careful of losing rank to competition.[2] 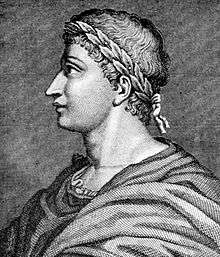 In some countries the laurel wreath is used as a symbol of the master's degree. The wreath is given to young masters at the university graduation ceremony. The word "laureate" in 'poet laureate' refers to the laurel wreath. The medieval Florentine poet and philosopher Dante Alighieri, a graduate of the Sicilian School, is often represented in paintings and sculpture wearing a laurel wreath.

In Italy, the term laureato is used in to refer to any student who has graduated. Right after the graduation ceremony, or laurea in Italian, the student receives a laurel wreath to wear for the rest of the day. This tradition originated at the University of Padua and has spread in the last two centuries to all Italian universities.

At Connecticut College in the United States, members of the junior class carry a laurel chain, which the seniors pass through during commencement. It represents nature and the continuation of life from year to year. Immediately following commencement, the junior girls write out with the laurels their class year, symbolizing they have officially become seniors and the period will repeat itself the following spring.

At Mount Holyoke College in South Hadley, Massachusetts, USA, laurel has been a fixture of commencement traditions since 1900, when graduating students carried or wore laurel wreaths. In 1902, the chain of mountain laurel was introduced; since then, tradition has been for seniors to parade around the campus, carrying and linked by the chain. The mountain laurel represents the bay laurel used by the Romans in wreaths and crowns of honor.[3]

At Reed College in Portland, Oregon, United States, members of the senior class receive laurel wreaths upon submitting their senior thesis in May. The tradition stems from the use of laurel wreaths in athletic competitions; the seniors have "crossed the finish line," so to speak.

At St. Mark's School in Southborough, Massachusetts, students who successfully complete three years of one classical language and two of the other earn the distinction of the Classics Diploma and the honor of wearing a laurel wreath on Prize Day.

In Sweden, those receiving a doctorate or an honorary doctorate at the Faculty of Philosophy (meaning philosophy, languages, arts, history and social sciences), receive a laurel wreath during the ceremony of conferral of the degree.

In Finland, in University of Helsinki a laurel wreath is given during the ceremony of conferral for masters's degree. Doctors wear special kind of Doctoral hat. 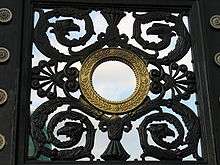 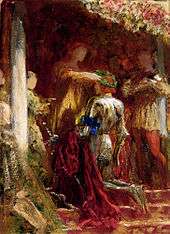 "Victory, A Knight Being Crowned With A Laurel Wreath" by Frank Dicksee

As used in heraldry 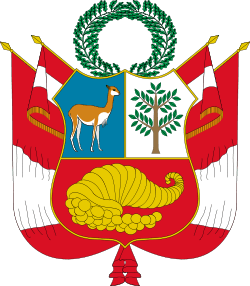 A laurel wreath in the coat of arms of Peru

Laurel wreaths are sometimes used in heraldry. It may be used as a charge in the shield, around the shield or on top of it.

The "wreath of service" is located on all commissioner position patches in the Boy Scouts of America. This is a symbol for the service rendered to units and the continued partnership between volunteers and professional Scouter. The wreath of service represents commitment to program and unit service.[4]