Lesle Lewis is an Indian singer and composer known for his work with Hariharan as the duo Colonial Cousins.[1]

Lesle Lewis is the son of P. L. Raj, a prolific film choreographer.[2] He was educated at St. Mary's High School, Mt. Abu in Rajasthan. He played guitar at the Cafe Royal, Oberoi Towers, Mumbai and recorded with Kalyanji–Anandji, Laxmikant–Pyarelal, R. D. Burman and Louis Banks.

From 1987 he composed advertising jingles and was nominated for awards from the Indian Academy of Advertising Film Art (IAAFA). In 1989 received an award for his work.

Lewis remixed Asha Bhonsle's album Rahul and I and composed songs for Janam samjha karo. He also composed and produced the music for Paree Hu Main by Suneeta Rao, Bombay Girl by Alisha Chinai and for KK's album Pal.

In 1998, Lewis recorded his first solo album, Haseena. He composed the score for the Hindi films Mela and Jahd and the Tamil films Modhi Vilayadu and Chikku Bukku. 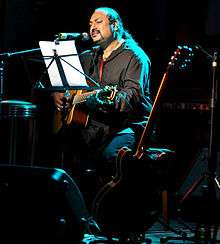 Lesle Lewis's at Launch of his album 'Tanha Sa Hoon'

Lewis first worked with ghazal singer Hariharanin in 1992, creating a jingle. They formed Colonial Cousins in 1996 and recorded an album, Colonial Cousins. They were the first Indian act to be featured on MTV Unplugged.[3] It won the MTV Indian Viewers' Choice award and Billboard Award for the Best Asian Music Group.[3][4] They released the albums The Way We Do It (1998) and Aatma (2001) and composed the soundtrack for the Tamil films Modhi Vilayadu[5] and Chikku Bukku.