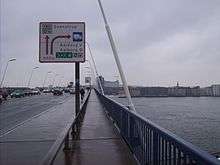 Entering Aalborg from the Limfjordsbroen. 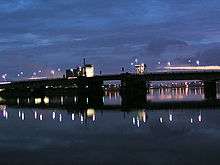 Night view of the Limfjordsbroen.

Limfjordsbroen is a Danish bridge which connects Nørresundby and Aalborg over Limfjord, a shallow sound. It was inaugurated 30 March 1933 in the presence of approximately 30,000 spectators and attended by Thorvald Stauning. It was a toll bridge until 1935.[1] The first fixed link between the two cities was established in 1865 in the form of a pontoon bridge, which was in use until the present bridge was established; the original bridge was slow to open and close when ship traffic passed. The bridge was built, without any fatalities, between 1930-33 with 100-200 workers on the construction site. Large sections were built on Aalborg's waterfront west of the bridge's current location. A week before the inauguration, a load test occurred with 48 fully laden trucks placed on the bridge's leaf. A 1960 extension lane increased the bridge's width from 8.5 metres (28 ft) to 12.5 metres (41 ft). A bike path and walking area were added as well. The horizontal clearance measures 98 feet (30 m).[2] Route 180 crosses the bridge.[3]