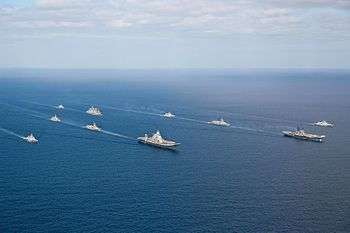 A flotilla of the Indian Navy's Western Fleet escort INS Vikramaditya and INS Viraat in the Arabian Sea.

In naval terminology, a destroyer is a fast, manoueverable, long-distance warship intended to escort larger vessels in a fleet, convoy or battle group and defend them against smaller, short-range attackers.[1][2] Sixteen destroyers have served, or currently serve, in the Indian Navy. The navy operates 10 guided-missile destroyers from three classes: Kolkata class, Delhi class, and Rajput class.[3] Six other destroyers (three R class and three Hunt class) have been decommissioned and scrapped.[4][5]

During the 1980s, India signed an agreement with the Soviet Union for five guided-missile destroyers, built under Rajput class.[10] The first ship (INS Rajput) of the class was commissioned on 30 September 1980. All five Rajput-class ships are still in active service.[11] The Rajput class was succeeded by the Delhi class, with INS Delhi, Mysore and Mumbai commissioned in 1997, 1999 and 2001 respectively.[12] The Delhi-class destroyers, built in India,[12] were succeeded by the Kolkata class in 2014.[13] The three Kolkata-class ships have been commissioned in 2014–2016, with INS Chennai being the last.[14] An improvement of the Kolkata-class, INS Visakhapatnam (part of the Visakhapatnam class), was introduced in April 2015 and will reportedly be commissioned by the end of 2018. Three more vessels are planned as part of the Visakhapatnam class.[15]

The Kolkata class (Project 15A) is a class of guided missile destroyers with stealth technology.[13] By the year 2000, the Indian Navy had redesigned the follow-on Kolkata class to improve technology (including modern stealth characteristics) and in May of that year, approval for the construction was given. Concept and function for Project 15A was framed by the navy's Directorate of Naval Design, while the detailed design was developed by Mazagon Dock Limited (MDL).[17] It consists of three ships (Kolkata, Kochi and Chennai), built by Mazagon Dock Limited, which are the navy's largest destroyers. Due to construction delays and a problem discovered during sea trials, the first ship's commission was postponed from 2010 to 2014.[18]

The Kolkata-class ships' primary offensive armament is supersonic BrahMos anti-ship and land-attack missiles.[23] The BrahMos missiles are fitted into a 16-cell universal vertical launcher module (UVLM) allowing one missile per launch silo; all 16 missiles can be fired in salvo.[24] A distinctive armament of the Kolkata class is its 76 mm (3.0 in) gun forward of the bridge. The 76 mm gun provides limited anti-shipping and anti-air capability in addition to naval gunfire support for land-based operations.[13] For anti-submarine warfare, the class is equipped with a torpedo-launching system (with four torpedo tubes) and two RBU-6000 anti-submarine rocket launchers.[13][25] Bharat Electronics Limited's electronic modular command and control applications (EMCCA) Mk4 provides combat management.[26]

The ships are fully fitted with flag facilities, such as their capability of operating in a NBC environment, and also Radar cross-section reduction is presumed to be minimal, to the extent that some sharp angles are flattened.[34] For primary air defence, a pair of two 3S-90 launchers (one forward of the bridge and the other atop the dual helicopter hangar) are fitted with the Shtil SAM system. The system consists of 24 Russian Shtil missiles in a below-deck magazine. The launchers elevate up to 70°, with a firing arc of 30° within the centreline. The launcher groups, which require a 20-man crew, weigh about 50 tons.[34]

The Rajput-class guided-missile destroyers built for the Indian Navy (also known as Kashin-II class) are modified versions of Soviet Kashin-class destroyers. The ships were built in the former Soviet Union with Indian modifications to the Kashin design. These included the replacement of the helicopter pad in the original design with a flight elevator (to transports flights, aircraft, and helicopters, from hangar deck to flight deck, and changes to the electronics and combat systems. Five units were built for export to India during the 1980s.[10]

The Rajput class inherited its anti-aircraft and anti-submarine warfare roles for aircraft carrier task-force defence against submarines, low-flying aircraft and cruise missiles from the Kashin class. They were the first ships in the Indian Navy to deploy the BrahMos supersonic cruise-missile systems, deployed during a mid-life refit of the ships. The missile system has four missiles in inclined, bow-mounted launchers (replacing two SS-N-2D Styx AShM launchers in INS Rajput) and an eight-cell VLS system replacing INS Ranvir and INS Ranvijay's aft S-125M (NATO: SA-N-1) SAM launchers. Ranvijay was deployed with an updated vertical launcher for the BrahMos missile.[10][11][36] The Indian Navy is planning to upgrade the propulsion of Rajput-class ships with an indigenously-developed Kaveri marine gas turbine (KMGT) engine. The Defence Research and Development Organisation Gas Turbine Research Establishment is developing this engine, which is currently being tested.[37]

The R class was a class of sixteen War Emergency Programme destroyers ordered for the Royal Navy in 1940 as the 3rd and 4th Emergency Flotilla. The Q and R class repeated the preceding O and P class, reverting to the larger J, K and N-class hull to allow for increased top weight (maximum permissible weight). Since they had fewer main guns than the J, K and Ns, magazine space was replaced by fuel bunkers[40] allowing for 4,675 nautical miles (8,658 km) at 20 knots (37 km/h) (compared with the 3,700 nmi (6,900 km) of their ancestors). Like the O and P classes, they were armed with available weapons: 4.7-inch (120 mm) guns on single mountings allowing only 40° of elevation. As a result, on paper they do not compare favourably with many of their contemporaries. These ships used the Fuze Keeping Clock HA Fire Control Computer.[41] The R class repeated the Qs, except that the officers' accommodation was moved from the traditional right aft to a more accessible location amidships.[40][42]

The Hunt class was a class of Royal Navy escort destroyer. The first ships were ordered early in 1939 and the class saw extensive service in World War II, particularly on the British east coast and in Mediterranean convoys. The Hunts were modelled on the 1938 escort sloop Bittern, a 262-foot (80 m) ship of 1,190 tons with 3,300 shp (2,500 kW) on geared turbines for  18 3⁄4 knots and an armament of three twin Mark XIX mounts for the QF 4-inch (102 mm) Mark XVI gun. The guns were controlled by a Fuze Keeping Clock AA fire-control computer when engaging aircraft. The Hunt class had the same armament with a quadruple QF 2-pounder-mount Mark VII on a hull of the same length, but with 8 feet (2 m) less beam and installed power raised to 19,000 shp (14,000 kW) to give 27 knots (50 km/h). The first twenty were ordered in March and April 1939. They were constructed to Admiralty standards (like contemporary destroyers), unlike frigates which followed mercantile practice.[46][47][48]

The Visakhapatnam class, with enhanced attack and stealth capabilities, are planned to succeed the Kolkata class. Of the four Visakhapatnam-class ships, two (INS Visakhapatnam and INS Mormugao) are under construction and the other two (INS Mormugao and INS Paradip) are in the planning stage.[49]

The Visakhapatnam class (Project 15B) is a class of stealth guided missile destroyers under construction. An improved version of the Kolkata class and ordered in 2011, the first Visakhapatnam-class ship is expected to be completed in 2018.[50][51] The class will have enhanced stealth characteristics and state-of-the-art weaponry and sensors, including the long-range Barak 8 surface-to-air missile. The first ship's keel was laid in October 2013. The Visakhapatnam class will be armed with a 127 mm main gun and an AK-630 close-in anti-missile gun system.[52][53]