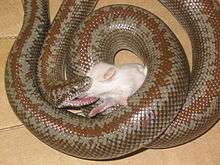 The robberfly is an insectivore, shown here having grabbed a leaf beetle 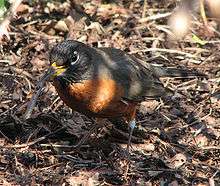 An American robin eating a worm

Feeding is the process by which organisms, typically animals, obtain food. Terminology often uses either the suffixes -vore, -vory, -vorous from Latin vorare, meaning "to devour", or -phage, -phagy, -phagous from Greek φαγειν, meaning "to eat".

The evolution of different feeding strategies is varied with some feeding strategies evolving several times in independent lineages. In terrestrial vertebrates, the earliest forms were large amphibious piscivores 400 million years ago. While amphibians continued to feed on fish and later insects, reptiles began exploring two new food types, other tetrapods (carnivory), and later, plants (herbivory). Carnivory was a natural transition from insectivory for medium and large tetrapods, requiring minimal adaptation (in contrast, a complex set of adaptations was necessary for feeding on highly fibrous plant materials).[1]

The specialization of organisms towards specific food sources is one of the major causes of evolution of form and function, such as:

By mode of ingestion

There are many modes of feeding that animals exhibit, including:

By mode of digestion

Polyphagy is the ability of an animal to eat a variety of food, whereas monophagy is the intolerance of every food except of one specific type (see generalist and specialist species).

Another classification refers to the specific food animals specialize in eating, such as:

The eating of non-living or decaying matter:

There are also several unusual feeding behaviours, either normal, opportunistic, or pathological, such as:

An opportunistic feeder sustains itself from a number of different food sources, because the species is behaviourally sufficiently flexible.

Some animals exhibit hoarding and caching behaviours in which they store or hide food for later use.

Alcohol – it is widely believed that some animals eat rotting fruit for this to ferment and make them drunk, however, this has been refuted in the case of at least elephants.[2]