Little Town on the Prairie

Little Town on the Prairie is an autobiographical children's novel written by Laura Ingalls Wilder and published in 1941, the seventh of nine books in her Little House series. The story is set in De Smet, South Dakota. It opens in the spring after the Long Winter, and ends as Laura becomes a schoolteacher so she can help her sister, Mary, stay at a school for the blind in Vinton, Iowa. It tells the story of 15-year-old Laura's first paid job outside the home and her last terms of schooling. At the end of the book, Laura receives a teacher's certificate, and is employed to teach at the Brewster settlement, 12 miles (19 km) away.

Little Town was one runner-up for the Newbery Medal in 1942, as the fourth to eighth Little House books all were from 1938 to 1944. In retrospect the five novels are called Newbery Honor Books.[4]

One day at supper, Pa asks Laura whether she will accept a job in town helping to sew shirts; the surge in people newly arrived in town means a need for services such as this. Laura hates the work, but continues because the money will help send her sister Mary to a college for the blind in Iowa. On the Fourth of July, Laura, Carrie and Pa walk to town to attend the celebration. The men organize horse races, and Laura's future husband, Almanzo Wilder, wins the buggy race with his two Morgan horses hitched to his brother's heavy peddler's wagon.

On the homestead, the family's crops of corn and oats are doing well, and Pa plans to sell them to pay for Mary to begin college that fall. In the summer, blackbirds descend and destroy both crops. Laura and Mary resign themselves that Mary will have to wait, but Pa sells one of their cows to make up the amount and Mary gets ready to go after all. When Ma and Pa escort Mary to the college, Laura, Carrie, and Grace are left alone for a week. In order to stave off the loneliness stemming from Mary's departure, Laura, Carrie, and Grace do the fall cleaning; they succeed despite a few mishaps, surprising Ma and Pa when they return.

In the fall, the Ingalls move to town for the winter; they believe the coming winter will not be as hard as the previous one, but as the claim shanty is not weatherproofed, Pa thinks it is best not to risk staying in it. In town, Laura and Carrie attend school again, and Laura is reunited with her friends Minnie Johnson and Mary Power. She also meets a new girl, Ida Brown, the adopted daughter of the town's new minister, Reverend Brown, who claims to be related to John Brown of Kansas. Nellie Oleson, her nemesis from Plum Creek, has moved to De Smet and is also attending the school. The teacher for the fall term is Eliza Jane Wilder, Almanzo’s older sister, who has a nearby claim of her own. Nellie turns Miss Wilder against Laura and Miss Wilder loses control of the school for a time. A visit by the school board restores order; however, Miss Wilder leaves at the end of the fall term.

For the winter term, Miss Wilder is replaced by Mr. Clewett. Laura sets herself to studying, as she only has one year left before she can apply for a teaching certificate, but can relax when the town of De Smet begins having literary meetings at the schoolhouse, where the whole town gathers for fun every Friday night: singing, elocution, a spelling bee, or plays and minstrel shows put on by the townspeople.

The winter is very mild, so Laura and Carrie never miss a day of school. Laura and her classmates become friendly after a birthday party for Ben Woodworth, and so Laura begins lagging in her studies, though she remains head of the class. Laura spends the summer studying to make up for lost time. The next school year, there is another new teacher, Mr. Owen. During a week of church revival meetings, Almanzo Wilder asks to escort Laura home from church. Ma is surprised at this because Laura is only fifteen, and Almanzo is a grown man.

Near Christmas, Mr. Owen organizes a school exhibition to raise awareness of the school's needs, as the school is becoming overcrowded. Mr. Owen assigns Laura and her friend Ida Brown the duty of reciting the whole of American history up to that point. Despite their nervousness, on the night of the school exhibition Laura and Ida perform perfectly, as does Carrie, who recites a poem. Almanzo once again sees Laura home, and offers to take her on a sleigh ride after he completes the cutter he is building.

At home, Laura is met by Mr. Boast and Mr. Brewster, who saw Laura perform at the exhibition and want her to take a teaching position at Brewster's settlement twelve miles (19 km) from town. The school superintendent comes and tests Laura; although she is not yet sixteen, he grants her a third-grade teaching certificate. The book ends with Laura preparing to teach school.

Though Wilder began writing the books as autobiographical recollections, they are considered historical fiction and have won a number of literary awards. In 1941, Little Town on the Prairie was awarded a Newbery Honor for exceptional children’s literature.

To encourage settlement of the mid-west part of the United States, Congress passed the Homestead Act in 1862. This act divided unsettled land into sections, and heads of households could file a claim for very little money. A section was 1-square-mile (2.6 km2), and a claim was ¼ of a section. 36 sections made a township. A section was identified by three numbers, for example NW quarter of Section 18, Township 109, Range 38. By paying $10.00 plus other filing fees, a man could get 160 acres (0.65 km2) of land for his use if he could live on it for 5 years and not give up to go back east. The Ingalls’ staked one claim near Plum Creek. In the spring of 1880, Charles Ingalls filed a homestead claim south of De Smet for the NE quarter of Section 3, Township 110, Range 56.[5]

Little Town on the Prairie takes place between the summer of 1881 and December 24, 1882. Mary enrolled in the Iowa School for the Blind in Vinton, Iowa on November 23, 1881. Although the Dakota territorial government paid the tuition for blind persons to attend the college, if the person was a Dakota resident, Laura's income was still necessary to help the family financially with Mary's absence.

In the context of Laura's books, the "Nellie Oleson" here is the Nellie from On the Banks of Plum Creek, although the character of Nellie was a conflation of two girls Laura knew: Nellie Owens, in Plum Creek and Genevieve Masters, here. In reality, Laura never saw the "Nellie" from Plum Creek again after her family left Minnesota.

Although Little Town on the Prairie ends with Laura's start as a schoolteacher, her life and that of her family continued. At age 18 Laura married Almanzo Wilder.[6] A year of Almanzo’ s childhood in rural New York is memorialized in her second book, Farmer Boy. Together they homesteaded and raised horses, which Almanzo loved. They had one daughter, Rose Wilder Lane, and lost a son in infancy. Rose grew up to become an author, among other things. Laura wrote over the years in the form of essays and articles for newspapers and magazines, mostly articles related to homesteading.[7] Laura wrote out the manuscript for each of her books by hand, and Rose helped her type and edit them. The well-known illustrations by Garth Williams appeared in the revised editions about 20 years later.

Virginia Kirkus had handled Ingalls Wilder's debut novel Little House in the Big Woods for Harper & Brothers as its children's book editor from 1926 to 1932. In Kirkus Reviews, her semimonthly bulletin from 1933, she had awarded the 3rd to 6th novels starred reviews. There would be no more. Of Little Town she advised, "These books are written in the third person, as if they were fiction, but actually each successive volume provides another panel in the autobiography of the author. This one is for distinctly older girls than its predecessor, as Laura secures her first post as school teacher, and puts her own school days behind her. ... For some reason, the almost-a-young lady Laura isn't quite as real as the child of the wilderness."[3]

Little Town on the Prairie was the fourth of five Newbery Medal runners-up for Ingalls Wilder, books 4 to 8 in the series.[4] 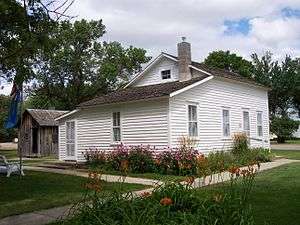 Today, De Smet, South Dakota attracts many fans with its historic sites from the books By the Shores of Silver Lake, The Long Winter, Little Town on the Prairie, These Happy Golden Years, and The First Four Years. From 1879 to 1894 the Ingalls family lived in De Smet and the family homestead, a house in town built by Charles Ingalls, the Brewster School where Laura taught, and the surveyor's home the family lived in between 1879 and 1880 are open to visitors.

The Little House on the Prairie television series was loosely based on the Little House books. A total of 203 episodes were produced and originally aired on NBC from 1974 to 1982. Pa was played by Michael Landon, Ma by Karen Grassle, Laura by Melissa Gilbert. Mary by Melissa Sue Anderson, and Carrie by identical twins Lindsay and Sidney Greenbush. The series remains popular in syndication and has been released on DVD.