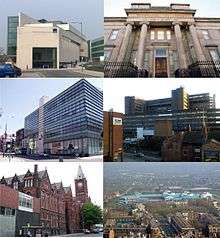 The "Knowledge Quarter" in Liverpool, England is a modern term in business given to the vicinity of Liverpool City Centre that focuses heavily on the education, knowledge and research sectors.

Although an unofficial ensemble, the Knowledge Quarter is recognised by the University of Liverpool, Liverpool John Moores University, Liverpool City Council, the Northwest Regional Development Agency and Liverpool Vision — all of which realise the importance of the area and its major role in the national and international knowledge sector.[1] Various institutions have been sited within the current borders of the knowledge quarter for centuries, and many institutions are currently undergoing multimillion-pound redevelopment schemes to cement the knowledge quarter as the United Kingdom's most successful such location.[1] The knowledge quarter generates around 15% of the entire city's GVA and is educating upwards of 60,000 individuals in all manner of disciplines.[2]

Geographically, the Knowledge Quarter stretches from Upper Parliament Street in the south to Islington in the north and is bound by Grove Street and Low Hill to the east and Renshaw Street to the west.[1] The knowledge quarter generates £1 billion in income per year and supports some 14,000 full-time jobs.[1] It is one of the greatest contributors to the economy of Liverpool.[1] Liverpool Cathedral, Liverpool Metropolitan Cathedral, Philharmonic Hall and the World Museum are also located within the knowledge quarter. Since the early 2000s (decade), hundreds of millions have been invested in expanding and improving the knowledge quarter, the single largest redevelopment scheme is the £451 million new Royal Liverpool University Hospital.[3]

City of Liverpool College is the only college of further education in the city, located on Myrtle Street was formed in 1991 by an amalgamation of four former colleges.[4] Since 1999 over £47 million has been invested in City of Liverpool College, which in 2005 was awarded Beacon College Status in recognition of its outstanding performance.[4] Approximately 17,000 students are enrolled at the institution.[4]

The Liverpool Institute for Performing Arts is a world class performing arts university that was established in 1996 by Paul McCartney and Mark Featherstone-Witty.[5] Despite its age, LIPA has already gained a reputation for being one of the UK's leading higher education institutions.[5] The university offers foundation certificate courses, undergraduate courses and performing arts classes for 4- to 19-year-olds.[5] The main LIPA building is housed in the former Liverpool Institute High School for Boys.[5]

Liverpool John Moores University is the largest educational institute in the city by student population (with around 26,000 enrolled).[2] LJMU was originally founded in 1825 as Liverpool Mechanics' School of Arts, over the next century it merged with various other colleges to become Liverpool Polytechnic and in 1992 was granted university status as one of the United Kingdom's many 'new universities'.[6] LJMU is arranged into six Faculties including Business and Law; Education, Community and Leisure; Health and Applied Social Sciences; Media, Arts and Social Science; Science and Technology and Environment.[6] The majority of these faculties are located at the Byrom Street and Mount Pleasant campuses – both of which are situated within the "Liverpool knowledge quarter".[6] Mass regeneration of LJMU has occurred since the start of the 21st century, amongst some of the university's newest properties are the £25 million Tom Reilly Building, the £27 million Art and Design Academy and the £37.6 million Clarence Street Building. In total, the university has invested some £180 million in a 10-year campus development programme (2003 to 2013).[7]

The Liverpool School of Tropical Medicine was founded in 1898 as the first such school of its kind in the world.[8] The school has made many contributions to tropical medicine, most notably the identification of the vector for malaria by Ronald Ross (who eventually went on the win a Nobel Prize for his discovery).[8] LSTM is now a registered charity affiliated to the University of Liverpool and offers numerous postgraduate courses and diplomas.[8] In 2005 Bill Gates donated £28 million to LSTM which allowed for a new £23 million state-of-the-art facility to be built adjoined to the original school.[8]

Liverpool Science Park was established in 2006 with the completion of the 3,300 m2 (36,000 sq ft) Innovation Centre 1 (ic1).[9] Within its first year of existence, ic1 attracted over 50 new companies to the city, which further enhanced Liverpool's position as a leading centre of knowledge and enterprise.[9] In 2009 a smaller wing called ic2 was launched which with five companies present has a 30% occupancy rate.[9] Nanotechnologies, healthcare, information technology, biotechnology, research and development into the automotive industry and specialist support services all have a strong presence at Liverpool Science Park which can be found between Mount Pleasant and Brownlow Hill.[9]

The £30 million NHS foundation trust Liverpool Women's Hospital was built in 1995 after the formation of The Liverpool Maternity Hospital, The Women's Hospital and Mill Road Hospital in 1985.[10] Liverpool Women's is one of only two such hospitals in the United Kingdom, as well as being the largest hospital in Europe devoted entirely to women's health.[11] Maternity services, gynaecology, gynaecologic oncology, neonatology, reproductive medicine and genetics services are all available at the hospital which is located in the very south-eastern corner of the Knowledge Quarter.[11]

The Merseybio Incubator on Crown Street contains 15 purpose-built laboratory units and offices that were built with the aim of developing biotechnology businesses in the city.[12] Merseybio is one of numerous new additions to the knowledge quarter, having been opened in early 2004.[13]

The National Oceanography Centre (formerly and still occasionally known as the Proudman Oceanographic Laboratory) is located on Brownlow Street to the immediate north of Liverpool Metropolitan Cathedral.[14] The centre is a fully owned research laboratory of the Natural Environment Research Council, world class research takes places at the NOC in the form of studying oceanography covering global sea levels and geodesy, numerical modelling of continental shelf seas and coastal sediment processes.[14] The NOC began life as the Liverpool Observatory in 1845 and since then has continued to predict tidal activity and monitor overall sea conditions.[15]

The Royal Liverpool University Hospital is the largest general hospital in the city with over 50 wards and 850 beds, the accident and emergency department itself is the largest of its kind in the United Kingdom.[16] The RLUH building which is sited on Prescot Street was built between 1966 and 1978 and is currently affiliated with both the University of Liverpool and Liverpool John Moores University.[16] In March 2010, plans to demolish the RLUH in 2012 were approved by the British Government, approximately £328m is to be spent constructing a new state-of-the-art hospital on the same site, with in excess of £100 million being spent on new equipment for the hospital.[3] Funding has been secured for the new 643-bed RLUH, and subject to planning approval, the facility could open in 2016.[3]

In November 2016 a draft Urban Village Masterplan was published for Paddington Village, this would be an eastward extension of the Knowledge Quarter with purpose built buildings. Two initial developments have already been announced the north headquarters of the Royal College of Physicians and Liverpool International College.[19] While a new Merseyrail station is proposed near the site of Crown Street railway station, in part to provide services to the quarter.