This is about the 19th century railway company. For the 21st century train operating company, see London Midland.

The London and Birmingham Railway (L&BR) was an early railway company in the United Kingdom from 1833 to 1846, when it became part of the London and North Western Railway (L&NWR).

The 112-mile (180 km) railway line which the company opened in 1838 between London and Birmingham was the first intercity line to be built into London. It is now the southern section of the West Coast Main Line.

The line was engineered by Robert Stephenson. It started at Euston Station in London, went north-north-west to Rugby, where it turned west to Coventry and on to Birmingham. It terminated at Curzon Street Station, which it shared with the Grand Junction Railway (GJR), whose adjacent platforms gave an interchange with full connectivity (with through carriages) between Liverpool, Manchester and London.

The railway engineer John Rennie proposed a railway line from London to Birmingham in 1823, and formed a company to build it by a route through Oxford and Banbury, a route later taken by the Great Western Railway.

Soon afterwards a rival company was formed by Francis Giles whose line would have been through the Watford Gap and Coventry. Neither company obtained backing for its scheme, and in late 1830 the two companies decided to merge.

The new company appointed Robert Stephenson chief engineer, and he chose the route through Coventry, largely to avoid possible flooding from the River Thames at Oxford.

London & Birmingham railway plan of the line and adjacent country by C.F. Cheffins, 1839.

The prospectus for the London and Birmingham Railway offered the following inducements to potential investors:

The company was created with an initial capitalisation of £5,500,000.[1] Much of the subscribed funds came from Lancashire, where great profits were being made in the cotton industries.[2]

The construction of the line was the subject of much opposition by landowners, who organised a campaign in the early 1830s to prevent the L&BR from driving a line across their estates. Turbulent public meetings were held in West Hertfordshire towns to protest against the project, including one held at the King's Arms public house in Berkhamsted. Another was held in Watford which was attended by wealthy and influential peers of the realm who had property interests on the planned route of the line: the Earl of Essex was keen to protect his Cassiobury Estate from invasion by the "iron horse", as was the Earl of Clarendon, who owned The Grove Estate. The anatomist Sir Astley Cooper was also in attendance, intent on preventing the new railway from cutting across his Gadebridge Estate. On 22 June 1832 Lord Brownlow of Ashridge voiced his opposition in the House of Lords to "the forcing of the proposed railway through the land and property of so great a proportion of dissentient landowners."[3] The L&BR Company's first application for an Act of Parliament to construct the line was rejected in 1832, due to pressure from landowners and road and canal interests.

The railway route proposals through Hertfordshire were modified and in May 1833 a second act was approved and the line received the royal assent. Construction began in November of that year. The line would follow the River Bulbourne instead of the River Gade, skirting around the edge of Hemel Hempstead to protect Sir Astley Cooper's interests; for this reason, Hemel Hempstead railway station is located a mile outside the town centre at Boxmoor.[3]

Peter Lecount, an assistant engineer of the London Birmingham railway, produced a number of - possibly hyperbolic - comparisons in an effort to demonstrate that the London and Birmingham Railway was "the greatest public work ever executed either in ancient or modern times".[4] In particular, he suggested that the effort to build the Great Pyramid of Giza amounted to the lifting of 15,733,000,000 cubic feet of stone by 1 foot (say, 450,000,000 m3 by 0.3 m).

The railway, excluding a long string of tasks – drainage, ballasting, and so on – involved the lifting of 25,000,000,000 cubic feet (say, 700,000,000 m3) of material reduced to the weight of stone used in the pyramid. The pyramid involved, he says, the effort of 300,000 men (according to Diodorus Siculus) or 100,000 (according to Herodotus) for twenty years. The railway involved 20,000 men for five years. In passing, he also noted that the cost of the railway in penny pieces, was enough to more than form a belt of pennies around the equator; and the amount of material moved would be enough to build a wall 1 foot (305 mm) high by one foot wide, more than three times around the equator. 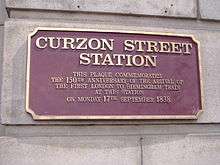 The line had been planned to open at the same time as the Grand Junction Railway which entered Birmingham from the north. However great difficulty in constructing the Kilsby Tunnel in Northamptonshire delayed the opening. The first part of the line between Euston Station[5] and Boxmoor (Hemel Hempstead) opened on 20 July 1837. The line was not finished in time for the coronation of Queen Victoria on 28 June 1838, but aware of the lucrative traffic the event would generate, the company opened the north end of the line, between Birmingham and Rugby, and the south end from London to a temporary station at Denbigh Hall near Bletchley with a stagecoach shuttle service linking the two parts to allow through journeys to London. The line was officially fully opened on 17 September 1838 with the first passenger train from London to Birmingham arriving that day. The first London to Birmingham trains took  5 1⁄2 hours to complete the  112 1⁄2 mile journey.[6]

It has often been claimed that initially, owing to the lack of power available to early locomotives,[8] trains from Euston were cable-hauled up the relatively steep incline to Camden by a stationary steam engine. This however was denied by Peter Lecount, one of the L&BR engineers, who wrote in his 'History of the Railway connecting London and Birmingham' (1839), page 48: "It is not because locomotives cannot draw a train of carriages up this incline that a fixed engine and endless rope are used, for they can and have done so, but because the Company are restricted, by their Act of Parliament, from running locomotive engines nearer London than Camden Town." The railway opened from Euston on 20 July 1837; the stationary engines and rope haulage did not commence until 27 September, and handled all trains from 14 October 1837. Until then, and whenever the rope system was stopped for repairs, locomotives hauled the trains up the incline. From November 1843 some expresses were worked without recourse to the rope, and from 15 July 1844 the rope working ceased permanently.

Initially it was decided that it would be cheaper to work the railway by a contractor, and Edward Bury was chosen and awarded the contract in May 1836. The contract stipulated that the Company would provide locomotives to Bury's specification, while he would maintain them in good repair and convey each passenger and each ton of goods for a fixed sum at a speed not to exceed  22 1⁄2 miles per hour.

Bury provided specifications and drawings for a passenger and a goods engine, and by mid-1841 the L&BR was equipped with sixty 2-2-0 passenger engines and thirty 0-4-0 goods engines. They all had inside cylinders and dome-topped fireboxes, and were mounted on inside bar-frames; they were manufactured by seven different firms, including Bury's own.

Working the line by contract never worked in practice, because of the unforeseen ever-increasing traffic and the demand for higher speeds, so in July 1839 the contract was annulled, and thereafter Bury was engaged as Manager of the Locomotive Department in the normal way, on a fixed salary with a profits bonus.

By the end of the L&BR's separate existence in July 1846, the total stock was about 120 locomotives; some six-wheeled engines had been acquired, but some of these proved inferior to the original four-wheelers.

The locomotive workshops were established in 1838 at Wolverton, roughly halfway between the two termini at London and Birmingham. These workshops remained in use for locomotive repairs until 1877, but had been gradually taken over by the Carriage Dept from 1864, and remained as a manufacturing facility up until the 1980s; today just a few parts of the original Wolverton railway works are used solely for rolling stock maintenance and repair. 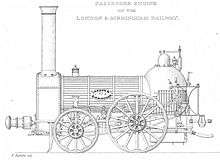 The first branch from the main line was the Aylesbury Railway, seven miles of single track, which opened in 1839 and was leased to the L&BR until purchased outright by the LNWR in 1846. The Warwick and Leamington Union Railway, a branch of almost nine miles between Coventry and Leamington, was purchased by the L&BR in 1843 and opened in 1844.

From 1840, when the Midland Counties Railway made a junction to its line at Rugby, the L&BR also provided through connections from London to the East Midlands and the North East. It also made connections to the Birmingham and Derby Junction Railway at Hampton-in-Arden between Coventry and Birmingham.

In 1845, the Northampton and Peterborough Railway, a 47-mile branch from the main line, was opened from Blisworth. Also in 1845 branch lines, from Bletchley to Bedford and from Leighton to Dunstable, were leased; they opened in 1846 and 1848. In 1846 the L&BR leased the West London Railway (jointly with the GWR) which opened in 1844 between Willesden Jct and the canal basin at Kensington.

The L&BR purchased the Trent Valley Railway in 1846 on behalf of the LNWR; this fifty-mile line connected Rugby on the L&BR with Stafford on the Grand Junction Railway thus creating a more direct line from London to Liverpool and Manchester by avoiding the original route through Birmingham. The Rugby and Stamford Railway, a further branch into the Eastern Counties was approved in 1846. 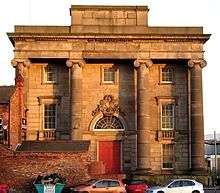 Hardwick's Curzon Street station, the Birmingham terminus of the line

In 1846 the L&BR merged with the Grand Junction Railway and the Manchester and Birmingham Railway to form the London and North Western Railway, which in turn was later absorbed into the London Midland and Scottish Railway, before finally passing into the hands of the nationalised British Railways in 1948 to become part of the West Coast Main Line as it is known today. The major change to the line during this period was electrification, which was carried out during the mid-1960s as part of BR's Modernisation Plan.

Neither of the L&BR's original termini, both designed by Philip Hardwick, has survived in its original form. Curzon Street station in Birmingham closed to passenger traffic in 1854 (the original entrance building remains) when it was replaced by New Street station and the original Euston station in London was demolished in 1962 to make way for the present structure which opened in 1968.

London and Birmingham railway gallery for 1838