Russell was the elder son of Arthur Russell of Killowen, County Down, and Margaret Mullin of Belfast, born at 50 Queen Street (now Dominic Street) in Newry, County Down. The family was in moderate circumstances, their ancestors having suffered much for the Roman Catholic faith in the seventeenth and eighteenth centuries. Arthur Russell having died in 1845, the care of his large family devolved upon their talented mother and their paternal uncle, the celebrated Dr. Russell of Maynooth. Charles was one of five children, his three sisters all becoming nuns and his brother was ordained as a Jesuit priest. He studied at the diocesan seminary, St Malachy's College, Belfast, at a private school in Newry, and Castleknock College, in Castleknock, Dublin. He then entered the law offices of Messrs Denvir, Newry, in 1849, and of O'Rourke, McDonald & Tweed, Belfast, in 1852. Admitted a solicitor in 1854, he practised in the county courts of Down and Antrim, and became at once the champion of the Catholics who had resisted organised attempts at proselytising by Protestants in these counties.

His success was so striking that his legal friends urged him to become a barrister in London, and in 1856 he entered Lincoln's Inn. Having followed an extensive course by close private study under the direction of Maine, Broom, and Birkbeck, he was called to the Bar in 1859. His success on the northern circuit soon recalled him to London, where he took silk in 1872,[1] and divided the mercantile business of the circuit with Lord Herschell. The increasing demand for his services may be judged by his fees which averaged £3000 a year from 1862–1872, £10,000 in the next decade, £16,000 in the third, and in 1893–1894, his last year of practice (while Attorney-General), reached £32,826. His knowledge of law, business, and human character, a flexible and often passionate eloquence which derived its force from intense earnestness rather than oratorical device, marvellous dexterity in extracting the truth from witnesses, and a manifest honesty of purpose gave him a power over judge and jury which made him universally regarded as the first advocate of his age. He was a strong supporter of the cause of Mrs Florence Maybrick, whom he believed to have been wrongly convicted.[2]

In his first years in London he had been weekly correspondent of the Dublin paper "The Nation", an advanced Nationalist organ, and entered Parliament as a Liberal being elected, after two defeats, member for Dundalk in 1880. He generally acted with the Nationalists on Irish, and always on Catholic, questions, and, when he visited the United States of America in 1883, bore a flattering introduction from Charles Stewart Parnell. Elected member of parliament for Hackney South (1885–1894), he was knighted and appointed Attorney General by Prime Minister William Ewart Gladstone in 1886,[3] and again became Attorney General in 1892[4] on the return of the Liberals to power. He was a strenuous advocate of Irish Home Rule in Parliament and on public platforms, and was leading advocate for Parnell at the Parnell Commission hearings in 1888–89.[5] His cross-examination of the witnesses of the "Times", and especially his exposure of Richard Pigott, the author of the forgeries, made a favourable verdict inevitable. His famous eight-day speech for the defence was his greatest forensic effort. 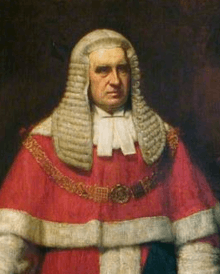 In 1893 he represented Britain in the Bering Sea Arbitration, his speech against the United States' contentions lasting eleven days, and was appointed to the Order of St Michael and St George as a Knight Grand Cross (GCMG) "in recognition of services rendered in connection with the recent Behring Sea Arbitration" that year.[6] Having been sworn of the Privy Council in April 1894,[7][8] he was made a Lord of Appeal in Ordinary in May[9][10] and was raised to the peerage for life as Baron Russell of Killowen, of Killowen in the County of Down,[9][10] from his native village of Killowen. In July that year, he was appointed to be the Lord Chief Justice of England,[11][12] the first Catholic to attain that office for centuries. He won speedily the public confidence and is ranked with the most illustrious of his predecessors. Lord Russell of Killowen revisited the United States in 1896 as the guest of the American Bar Association and delivered a notable address on arbitration. In 1899 he represented Britain during the Venezuelan boundary dispute arbitration hearings which followed from the Venezuela Crisis of 1895, and displayed all his old power of separating vital points from obscuring details. The following year he was attacked while on circuit by an internal malady, and, after a few weeks' illness, died in London, after receiving the sacraments of the Catholic Church, of which he had been always a faithful and devoted member.

He married in 1858 was Ellen Mulholland, daughter of Dr. Mulholland, of Belfast, who succeeded him. They had five sons and four daughters, including:[13]

The unanimous tribute paid him by the English and American Bar and by the people and journals of the most diverse political and religious views attested that, despite his masterful character as lawyer, judge, and parliamentarian, and his stalwart loyalty to his faith and country, he had attained a rare and widespread popularity. In him were blended many qualities not usually found together. With a keen and orderly mind, a resolute will, great capacity for work, and severe official dignity, he combined sensibility of temperament, a spirit of helpfulness and comradeship, and a dreamer's devotion to ideals. He was always ready to write and speak for educational, religious, and benevolent purposes, though such action was not calculated to forward his political ambitions. Devoted to his family, he crossed the continent on his first American trip to visit Mother Mary Baptist Russell of San Francisco (who, with two others of his sisters, had entered the Order of Mercy), and found time to write for his children and send them day by day an admirable account of his experiences.

He was caricatured twice by "Spy".