The LA Marathon (formerly the City of Los Angeles Marathon) is an annual running event held each spring in Los Angeles, California. The 26.219 mile (42.195 km) footrace, inspired by the success of the 1984 Summer Olympic Games, has been contested every year since 1986. The 31st edition of the marathon took place on February 14, 2016. The marathon is currently sponsored by Skechers, and thus its official title is the Skechers Performance LA Marathon.

Over the course of its 31-year history, the LA Marathon has become one of the largest marathons in the country with more than 25,000 participants, thousands of volunteers and hundreds of thousands of spectators.

The historic race, which has seen unprecedented growth since introducing the iconic “Stadium to Sea” course, draws runners from all over the world to take a tour of Los Angeles running past every major landmark. The "Stadium to the Sea" route was not the original route: the original route ended at the Los Angeles Memorial Coliseum, and a route around the turn of the millennium both started and ended in Downtown Los Angeles. The current route starts at Dodger Stadium (Frank McCourt, the current owner of the Marathon, once owned the Los Angeles Dodgers) and ends in Santa Monica.

In 1987, six students at East Los Angeles’ Boyle Heights High School enrolled in a marathon training program offered by teacher Harry Shabazian. On March 4, 1990, two dozen teachers from around the city joined the three co-founders, with students from their respective schools, and together, they all ran in the Los Angeles Marathon V. In 1993, Students Run LA spun off from LAUSD and became an independent 501(c)(3) organization. [1] SRLA continues to provide its after-school mentoring and training program to all students for free.

Today, more than 3,200 middle and high school students train alongside 500 volunteer leaders.[2] These leaders provide “on-the-run” mentoring, showing (not telling) students how to set goals, gain confidence, and develop life-long healthy habits by training for the LA Marathon. After joining the elite group of marathon finishers, SRLA students know they can do anything!

Running success translates into the classroom. In June 2015, 99% of SRLA seniors graduated high school, and 95% of them plan to attend college. Since 1989, more than 57,000 students have been served by SRLA. The growth of the program has only increased its success. Each year:

Inspired by the success of SRLA, a pilot project was begun with the Montreal Marathon and Students on the run (Étudiants dans la course) was created with the first objective to complete the September 2010 Montreal Marathon. There were 19 students to begin with and 12 completed the 2010 event. The program continues with a new group and a new objective, complete the 2011 event.[3] 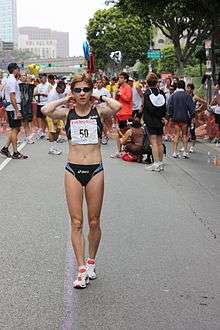 Ages of top finishers in the Masters category are given in parentheses.

Note 1: From New Caledonia, a territory of France.