For the village in Greece, see Loures, Heraklion.

The municipality is basically divided in three areas: the rustic one, to the north (the parishes of Lousa, Fanhões, Bucelas, Santo Antão do Tojal and São Julião do Tojal), the urban one, to the south (Frielas, Loures and Santo António dos Cavaleiros) and the urban-industrial, to the east (Apelação, Bobadela, Camarate, Moscavide, Portela de Sacavém, Prior Velho, Sacavém, Santa Iria de Azóia, São João da Talha and Unhos).

In this eastern area, the ten local parishes claim to be independent from Loures, and form its own municipality set in the town of Sacavém. This struggle dates from the beginnings of the Portuguese Republic, and has a very strong support among the local population. 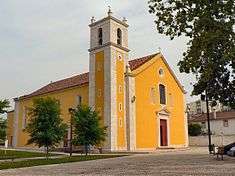 The historical Church of Loures, in the centre of urban centre of the town of Loures

Loures was a Roman settlement back at the beginning of the 1st millennium, based in a cemetery that eventually became the site of the first church.[4] It was also a region notable for the presence of many castros, before the Roman occupation; the Romans influenced many of these settlers to abandon the foothills and begin occupying the fertile lowlands for economic reasons.[4] After the Romans, the Visigoths began occupying the territory, followed by the Moors (after the 8th century).[4]

The parish of Loures was first mentioned in 1118, and again in 1191, along with the parishes of Unhose and Sacavém.[4] At the time the region was mainly agricultural, and involved in small export trade, that included the cultivation of lettuce (a vegetable that continues to be cultivated). The first written document appeared in 1170, written by Afonso Henriques, who provided privileges and benefits to the Moors that lived on the outskirts of Lisbon in the sallayos (the fields to the north of Lisbon, at the time). In 1178, King Sancho I of Portugal having discovered that the Moors of Lisbon were allied to groups in Loures, and came to the territory with a Templar force to confront those peoples.[4] Following the defeat of the Moors, the King transferred the region to the Knights Templar, who established the sect of warrior-monks. The extinction of Templars in 1311, opened the way for the expropriation of lands and property by the Pope.[4] King Denis of Portugal, on the other hand, proposed the creation in Portugal of a new Order to replace the Templars that would be the recipient of these assets: the Order of Christ.[4] In Loures, the Templar lands passed into the hands of this religious order, eventually constructing a new Church over the ruins of the 4th-century temple, located alongside the Christian cemetery that existed there.[4]

In addition to the main settlement, the village of Montemor, situated at a height of 350 metres, was sought by residents from Lisbon during the Plague.[4] The Chapel of Nossa Senhora da Saúde was built during this era: in 1598, the Plague devastated the capital, and for five years on it spread across the country (resulting in the death of approximately 80,000 victims).[4] Fleeing the contagion, many of urban residents escaped into the country to the elevated villages, which they assumed protected them from the disease.[4] Some families brought with them the image of Our Lady of Health, and raised a church, in order to defend themselves of the Plague: by 1604 the threat had passed, and no cases of the disease were discovered within the territory.[4] A myth developed for successive generations of the miraculous influence of the patron, providing protection from health-related disease.[4]

By the 19th century, between 1832 and 1834, cholera spread throughout the region, and the people of Loures, once again, implored Our Lady of Health to protect them from epidemic.[4] Owing to their fears, the image of the saint was removed from Montemor, and paraded through Loures in procession.[4] It remained in the altar of the Church of Loures until the threat had passed, when it was finally returned to its hermitage in Montemor. Loures was elevated to the status of "town" on 26 October 1926, under decree 12/543, and later city on 9 August 1990, under decree 35/90.

Administratively, the municipality is divided into 10 civil parishes (freguesias):[5]

Loures is twinned with:[6]