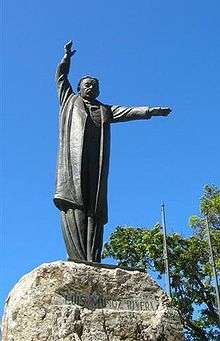 Statue of Luis Muñoz Rivera, located at the park which bears his name.

In 1919, land was set aside to create a large recreational park for the residents of San Juan. The land once formed part of the city's "Third line of defense" built in the 18th century. The powder magazine built in 1769, “El Polvorín de San Gerónimo”, designed by military engineer Thomas O'Daly, is still located on the grounds of the park.

The east side of the park is bordered by the Puerto Rican Supreme Court building designed in 1952-56 by architects Toro Ferrer. To the north lies the public beach called "Escambron", the Parque del Tercer Milenio and the Sixto Escobar Stadium, former home of the San Juan Senators and Santurce Crabbers baseball clubs.

The park was designed by Bennett, Parsons & Frost of Chicago in 1925. Its construction from 1926 to 1934 was directed by William Parsons and Francisco Valines Cofresí. The distinctive faux bois park elements and furniture were designed by sculptor Victor M. Cott in the 1930s. Subsequent major restorations have been directed by architects Orval Sifontes in the 1970s, Otto Reyes Casanova in 1990-93, and by Andres Mignucci, FAIA in 2000-04.