This article is about the former Federated Department Stores. For its chain of department stores, see Macy's.

Macy's, Inc., originally Federated Department Stores, Inc., is an American holding company headquartered in Cincinnati, Ohio. It is the owner of department store chains Macy's and Bloomingdale's, which specialize in the sales of clothing, footwear, accessories, bedding, furniture, jewelry, beauty products, and housewares; and Bluemercury, a chain of luxury beauty products stores and spas. As of July 26, 2015, the company operated approximately 885 stores in the United States, Guam, and Puerto Rico;[5] its namesake locations and related operations account for 90 percent of its revenue.

According to Deloitte, Macy's, Inc. is the world's largest fashion goods retailer and the 36th largest retailer overall, based on the company's reported 2010 retail sales revenue of $25 billion (equivalent to $27.2 billion in 2016).[6]

Federated Department Stores was founded in Columbus, Ohio on November 25, 1929 as a department store holding company for Abraham & Straus, F&R Lazarus & Company (including its Cincinnati division, then known as Shillito's) and William Filene's Sons of Boston; Founded by Xavier Warren, Federated was the successor to the Lazarus operation begun in Columbus in 1851. In the mid-1930s, a modern merchandising standard was set when Fred Lazarus, Jr. arranged garments in groups of a single size with a range of style, color and price in that size, basing the technique upon observations made in Paris. Lazarus also convinced President Franklin D. Roosevelt that changing the Thanksgiving holiday from the last Thursday of November to the fourth Thursday, extending the Christmas shopping season, would benefit the nation's business; an act of Congress perpetuated the arrangement in 1941. After this date Black Friday became a nationwide sensation and the most profitable day for Federated. Various Lazarus family members also held key positions on Federated's board and within its various divisions—namely, Foley's, Filene's, Lazarus and Shillito's. Robert Lazarus Jr. was the only family member still with an official role at Federated until his death in 2013, serving as assistant to Ron Klein, then chairman and CEO of the Rich's/Lazarus/Goldsmith's operating unit. Federated's corporate offices were relocated to Cincinnati in 1945.

The later half of the 20th century saw the company expand nationwide, adding Rike Kumler of Dayton, Ohio (merged into Shillito's in the 1980s to become Shillito-Rike's); Burdines of Miami, Florida; Rich's of Atlanta, Georgia; Foley's of Houston, Texas; Sanger Brothers and A. Harris, both of Dallas, Texas (which was merged with Sanger Brothers to form Sanger-Harris); Boston Store of Milwaukee, Wisconsin; MainStreet of Chicago, Illinois; Bullock's, of Los Angeles; I. Magnin, of San Francisco, California; Gold Circle; and Richway Discount Department Stores of Worthington, Ohio. In 1982, Federated acquired the Twin Fair, Inc. discount store chain based in Buffalo, New York and merged it with Gold Circle.[7] In 1983, it sold most of its infrastructure to JMB Realty.

To support its huge retail operations, Federated centralized its back-office functions into several large divisions, covering financial services, marketing, merchandising, logistics, and data processing systems. Other retailers' branded credit cards are usually issued and serviced by a third-party bank; Federated was so huge that it ran its own private bank, FDS Bank, which for many years issued and maintained the majority of its own consumer credit card portfolio with a portion at one time owned by General Electric Credit Corporation, an arrangement inherited from when R.H. Macy & Company sold their credit portfolio in an attempt to prevent filing for bankruptcy. In 2005 Federated finalized an arrangement with Citigroup to sell its consumer credit portfolio, reissuing its cards under the Federated-CitiGroup Alliance name Department Stores National Bank (DSNB) and allowing Federated to continue servicing the credit accounts from its Financial, Administrative and Credit Services Group (Macy's Credit and Customer Services)

In 1990, Federated—now under the control of Robert Campeau—went bankrupt after its hostile takeover of Allied Stores; it emerged from bankruptcy after the ouster of Campeau in 1992 as a new public company. Federated then took over Macy's in 1994 while that company was still emerging from its own bankruptcy in 1992. Federated entered e-commerce late, in 1998. FDS Bank was one of the last credit card banks to begin to allow its cardholders to access account information online (around 2004). The department store chain Stern's, a division of Federated, ceased operations in 2001 and most of its stores became Macy's stores. In 2003, Federated changed the nameplates of all their non-Macy's stores, except Bloomingdale's, to include the Macy's name. The rebranding process was referred internally to as Project Hyphen. Under the plan, Seattle-based The Bon Marché became Bon-Macy's; Goldsmith's in Tennessee became Goldsmith's-Macy's; Lazarus, Burdines, and Rich's also added "-Macy's" to their name. A year later, the original hyphenated names were dropped in favor of just Macy's, a rebranding process referred internally to as Project Star.

Federated settled an SEC investigation for $14.46 million (equivalent to $21 million in 2016) in 1998 due to unethical debt-collection practices. Federated routinely forced credit card holders/debtors to sign an agreement that legally bound them to repay their outstanding balances instead of having the unsecured debt discharge via the filing of bankruptcy. Federated failed to file reaffirmation agreements with bankruptcy courts. As a result, the changes in the agreements were not legally binding.[8][9][10]

The former Federated Department Stores logo, in use until 2007.

Federated announced plans to sell 80 store locations in 2006, having pledged in its settlement to sell most of them as viable businesses, with preference being given to a group of thirteen competitors. This number could fluctuate pursuant to Federated's negotiations with various mall landlords and its final decision regarding using former Macy locations for its luxury Bloomingdale's operation.

On January 12, 2006, Federated announced its plans to divest May Company's Lord & Taylor division (48 stores in 12 states) by the end of 2006 after utilizing prime and conflicting real estate by closing and converting several locations. On June 22, 2006, Macy's announced that NRDC Equity Partners, LLC would purchase Lord & Taylor for US$1.2 billion (equivalent to $1.41 billion in 2016), and completed the sale in October 2006.

On September 9, 2006, May Company division stores Famous-Barr, Filene's, Foley's, Kaufmann's, Hecht's, The Jones Store, L. S. Ayres, Marshall Field's, Meier & Frank, Robinsons-May, and Strawbridge's brands ceased to exist as Federated replaced most of them with the Macy's masthead, and a few converting to the Bloomingdale's brand. The conversion of Marshall Field's in Chicago has been particularly criticized, with many customers boycotting its historic State Street flagship store. The Chicago Tribune continues to report on the poor reception of Macy's in Chicago. Pittsburgh customers strongly resisted the change from Kauffman's most due to the local parade that the store had run for years. The loss of local mainstays, such as Famous-Barr in St. Louis and Filene's in Boston, were also met with criticism, but they were not nearly as vocal as Marshall Field's.

One of the consequences of this rebranding is that several malls have two Macy's stores. In Downtown Boston, Federated liquidated an acquired Filene's because it already had a Macy's (formerly a Jordan Marsh) across the street. The two stores have a combined floorspace of more than 1,400,000 square feet (130,000 m2), more than two-thirds the size of Macy's New York City flagship store.

On November 17, 2006, the bridal and formal unit was sold. David's Bridal and Priscilla of Boston were sold to Leonard Green & Partners. After Hours Formalwear was sold to Men's Wearhouse.[11] 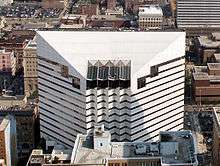 On February 27, 2007, Federated announced that its board of directors would ask shareholders to change the company's name to Macy's Group, Inc. By March 28, the company revised its plans for the new name, opting to eventually become Macy's, Inc. Federated shareholders approved the revised proposal during the company's annual meeting on May 18, 2007.[12] The company was previously known as Federated Retail Holdings, Inc.

The name took effect on June 1, 2007. Reasoning for the proposed name change, according to Terry Lundgren, Federated's chairman, president and chief executive officer — hinges on the large-scale conversions throughout the company toward the Macy's nameplate. "Today, we are a brand-driven company focused on Macy's and Bloomingdale's, not a federation of department stores," Lundgren said in the company's press release heralding the proposed name.[13] Upon the change to Macy's Inc., Federated's stock ticker symbol on the New York Stock Exchange changed from "FD" to "M", making the new Macy's Inc. one of a handful of single-letter ticker symbol companies.[14]

In April, 2008, Moody's Investors Service said that it may downgrade Macy's Inc. bonds to just above junk status.[15] That same month, Fitch Ratings downgraded their ratings to BBB- from BBB, noting a deterioration in the company's operating and credit metrics. A rating of BBB- is one notch above junk status.

The domain macysinc.com attracted at least 3 million visitors annually by 2008 according to a Compete.com survey.[16]

On February 2, 2009 Macy's announced the elimination of 7,000 jobs, or 4 percent of its work force, and slashed its dividend as it looked to lower expenses as part of major restructuring. Cincinnati-based Macy's Inc. said the work force reduction includes positions in offices, stores and other locations. The cuts will include some unfilled jobs. "Reducing our workforce is an unfortunate outcome of the current economic environment, and I am frustrated that so many of our people will be unable to move forward with us as we proceed into a very exciting future for Macy’s and Bloomingdale's" said Terry J. Lundgren, chairman, president and chief executive officer. "

Macy's also got rid of its division structure and integrated its functions into one organization. Macy's central buying, merchandise planning, stores senior management and marketing functions merged to its New York City corporate office (formerly Macy's East). Corporate-related business functions, such as finance and human resources, will be primarily in Cincinnati. To buy with local consumers in mind, Macy's developed a concept called "My Macy's", in which the buyers and planners all look at what the local consumer base is looking for in their local Macy's store. This will help bring a better sense of branding, sizing, and marketing to each Macy's store nationwide.

Macy's Inc. decided to close the Bloomingdale's at the Mall of America in Minnesota. Since 1994, Bloomingdale's had been one of the 4 anchor stores of the mall, and will be replaced with a $30 million renovation with four new foreign clothing stores.

On October 14, 2013, Macy's Inc. announced the decision to open most of their stores for the first time on Thanksgiving Day 2013, breaking a long-standing tradition of 155 years, and joined the ranks of retailers who created Gray Thursday the year before. Its doors opened at 8 p.m. (local time) on the holiday evening, and remained open for 24 hours straight until the close of business on Friday, which is usually about 10 p.m.[17]