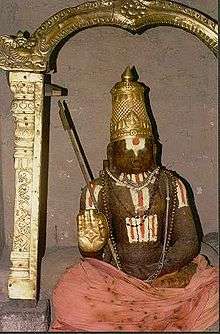 The majestic temple housing the divine sannidis, for Sri Kamalavalli Thaayar Sametha Sri Vaikunta Perumal and Sri Embar Swamy is located next to the holy pushkarini, full of lotus flowers. Just few hundred meters is the Birth House of Sri. Embar Swamy. The house is preserved as it was and no reconstruction work is carried out. Just a plastic covering made by the students of the Mutt to prevent it for further damage. The entire village was moved near the temple and this in turn made it easy for preserving the Birth House.

Currently at Madhuramangalam, the present pontiff of the mutt, His Holiness Sree Yatiraja Narayana Ramanuja Jeeyar Swami, is running a Veda / Agama patashala (Ramanuja Siddaantha Varthinee) and is in the process of constructing a building for the matam, in which his aaradhana swamy Sree Pattabiraaman will be housed and worshipped.

Mutt also has a Goshala (cow shed) where a cow and calf are under protective care. The Cow named Lakshmi and the calf is named Godha. Each responds to its respective name is the very amazing part. 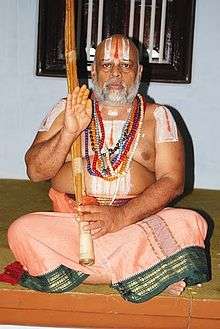 The vedic school where Pancharatra Agama based Bhagvad Aradhanam, Sreevaishnava Siddhantham, Vedam, Divyaprabandam and Bagvath Ramanujacharya's teachings and Siddhanthas are taught through a well qualified Agama teacher. The only Jeeyer in the area who is running a Vedapatasala in the area. Young students from the age of 10 years are studying in the school. Students who learnt here in this Vedic school are now offering Kainkaryams (service) in various temples. The school is run free of cost for the students. The expense of books and teachers are borne by Jeeyar. Also the stay, the Prasadam (food) and all necessary daily needs of the students are maintained by Jeeyar Also the mutt takes responsibility to perform Upanayanam and Panchasamskaaram for all the vidyarthis during their study course itself.

With the blessings of His Holiness Sree Yatiraja Narayana Ramanuja Jeeyar Swami, the shrikaryam team of the mutt, is taking up necessary steps for the expansion of the patashala. By 1000-year celebrations of Bagavad Ramanujacharya’s avathara tirunakshatram, which is going to be celebrated during the year 2017, the patashala will have at least 150 vidyarthis in RAMANUJA SIDDHANTHA VARTHINEE, learning ubhaya vedantham and agamam. For this purpose, a new building is being planned by shrikaryam team.

The person who has the desire to know the - who is he - The link between himself and lord - why he took birth - what is the reason he has to pass through life, disease,pain and death - who actually grants us the Moksham (liberation from Life & death cycle) - who will support him throughout his life

To know the answers for these one has to approach a Teacher who will guide him. The teacher in Srivaishnava Sampradayam is called as Acharyan. Spiritual Knowledge is not an easy task. It is beyond what modern science can ever find out. It is far away from one's imagination and one can ever find out.

Samashrayanam is a process of obtaining the minimum qualities to worship Lord Narayana through an Acharya (guru) with utmost sincerity. The Acharya will grant entry into this wonderful world called SriVaishnavam only upon seeing his sincere willingness and his character. The Acharya who initiates this process will automatically become his Acharya for this entire life. The person who undergoes this fivefold process will become the Sishya of that Acharyan. This also is the commitment about that he or she will live here after as per the wish of the Acharyan and discharge all the duties Acharyan orders. It is also owed to be faithful to Acharyan throughout life and respect his principles.

So now the person undergoes the five stage purification or Samskarams to become a SriVaishnava and follow the Srivaishnava Parampara.

Most Important: Undergoing Panchasamskaras will not make one a Srivaishnava until and unless one upholds the rules of the Sampradayam. If that person is not following the rules and regulations, he is as equivalent as an Avaishnava.

The following are the Samskarams one has to pass through.

This is the first stage where the Acharyan embosses the marks of Holy Sudarshana and PanchaJanya near the shoulders. We all are the servants of Lord Narayana through our acharyan. These holy marks are something like an ID card for the person.

Vishnu, the god of preservation, holds a Conch which represents space and also the life that emerges from the life-giving waters. His Sudarshana Chakra it remains constantly within His power, flies to exactly the point intended, decomposes that object back to its essential ingredients — which is Himself — and then returns to Him. So also, the ritualistic embossing of the conch and the discus upon the arms of a disciple signifies the acceptance of the fact that Vishnu pervades all, is the origin of all, and that to Him all things will ultimately return.

It is said in Shastras, Upanishad and Sookthas that wear the weapons of Lord Narayana that person will be free from all the miseries of life. It signifies the relation between the Jeevathama and Paramatma. It said, Yama (god of death) will not send his sentries to bring back the atama, instead the holy angels from Vaikuntam receive the atama. It is these signs make the Jeevathama purified to perform Lords Aradhana. In Garuda Puranam it is said that, Only a Srivaishnava person bearing hot seal impressions of Shanka and Chakra on shoulders are eligible to perform rituals for their forefathers.

The Jeevathama after getting Thapasamskaram which has such importance should follow Srivaishnavam in proper and meaningful manner.

This second Samskaram is where the jeevathama gets to know the 12 important powerful points of the body where Lord Narayana resides. And also the name of the Thayyar who lives with him and how does lord look like in those 12 places. These 12 places house the Upavyuvha forms of Lord Narayana. Each of the 12 places are adorned with Tirunnaman Kappu or the Urdhra Pundaras or the Tirunamam. The white portion is called as Tiruman and represent the Lotus feet of lord and should always be pointing up. The centre line represents the Consort of Lord Narayana. It os adorned with Shree choornam. Some use golden color since the goddess is of golden color (Hiranya varnam Harinieem....). And some use red color. Sumangalis wear this Shree Choornam in red color and a small Thiruman-like goddess Ghodha Devi Wears. And yellow Shree choornam if they are widows.

Now the Sequence of adorning the holy Urdhra Pundaras are:

1. On Forehead – Keshava. Lord holds Chakra in all four hands and his consort name is Sri

2. Above Belly button – Narayana. Lord holds Shanka in all four hands and his consort name is Amruthodbhava

3. At the centre of Chest – Madhava. Lord holds Koumodhaka in all four hands and his consort name is Kamala

4. Centre of front Neck – Govinda. Lord holds Saranga in all four hands and his consort is Chandrasodari

5. Right side above belly button – Vishnu. Lord holds ploughshares in all four hands and his consort name is Vishnu Patni

6. Right shoulders in line with the namam on the chest in terms of length and width – Madhusudhana. Lord holds a pounding rod in all four hands and his consort name is Vaishnavi

7. Right side of neck – Trivikrama. Lord holds a sword in all four hands and his consort name is Vararoha

8. Left side above belly button – Vamana. Lord holds Thunder Bolt in all four hands and his consort name is Hari Vallabha

9. Left shoulders in line with the namam on chest in terms of length and width – Sridhara. Lord holds an Axe in all four hands and his consort name is Sharngini

10. Left side of neck – Hrushikesha . Lord holds a crow-bar in all four hands and his consort name is Devadevika

11. On the back on spine above the hip joint – Padmanabha. Lord holds all his weapons in 8 eight hands and his consort name is MahaLakshmi

12. Behind & centre of neck – Damodhara. Lord holds a whip in all four hands and his consort name is Surasundari

Acharyan with his endless mercy performs this third Samskaram known as Nama Samskaram. He Acharyan adds DASA at the end of their names, to signify that he is now the Dasa or servant of Lord Vishnu & Bhagvad Ramanuja through the Acharyan. This is where a person he/she who has other than vishnu names are realloted with Lord Vishnu names.

As said by Bhagath Ramanujacharya "Total Unconditional Surrender to the Lotus feet of Lord Vishnu" is the only way the ordinary jeevathamas like us can attain Mukthi. Sri Vaishnavam was their thousands and thousands of years before Bhagvat Ramanujacharya was born, but it was Ramanujacharya who actually propagated it through a channel where in people from all walks of life can enjoy the benefits of worshiping Lord Vishnu. So it is now certain that he is the leader who can lead us out of the misery of Life and Death, who can show the proper way to lead a devotional meaningful life. It is his Siddhantha we have to follow and a total surrender to his holy feet. We even after undergoing the Pancha Samskaram are not eligible enough to worship the Supreme Lord. We have to go through a Spiritual Master who is first our Acharyan and Bhagvath Ramanujacharya. But Bhagvath Ramanujacharya is the Acharyan of all the Acharya's the Srivaishnavam has ever seen. So we totally surrender ourselves to Bhagvath Ramanujacharya.

We add our names in the following manner: A person by name Vasudeva who has undergone Samashrayanam is now Adeyen Vasudeva Ramanuja Dasan

If it is the case of a female who has undergone the Samashrayanam she is called as Ramanuja Dasi.

This is the Samskaram where the person gets the divine Upadesham (dedication) of the Moola Mantra. The Rahasya Traya Mantras are Ashtakshari mantram, Dvaya Mantram and Charma Slokam. A very very fortunate person will get to know these mantras. And the person who is now a Shishya (student) of that Acharyan must not at any cost disclose the Astakshari and Dvayam to anyone. These Secred Mantras only when got through an Acharya from a true sampradayam and Guru Parampara, will the power of the potency of these mantras.

First of all the most important mantra which is called as the Moola Mantra which was originated by Lord Himself. It's the most sacred Astakshari. This Moola Mantra should be chanted only after taking bath and doing Nitya Anustana and before consuming Prasadam (food). Prahalaadha, was given Upadesha (initiating) of this moola mantra from Narada Muni even when Prahalaadha was in the womb. Right from the start of the creation this moola mantra is used by countless number of Rishis do this Mantra japam to please Lord Vishnu and to get his blessings.

The second mantra called the Dvaya Mantra. It has two lines and this mantra, too, is Initiated by Acharyan himself. It has to be chanted as many times possible in the persons lifetime. There is no restriction for time and place for chanting this mantra.

This article is issued from Wikipedia - version of the 2/3/2014. The text is available under the Creative Commons Attribution/Share Alike but additional terms may apply for the media files.