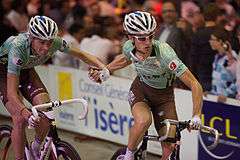 One racer propels his partner like a slingshot during a madison race.

The madison is a team event in track cycling, named after the first Madison Square Garden in New York, and known as the "American race" in French (course à l'américaine) and in Italian and Spanish as Americana.

The madison began as a way of circumventing laws passed in New York in the US, aimed at restricting the exhaustion of cyclists taking part in six-day races.

The wear and tear upon their nerves and their muscles, and the loss of sleep make them [peevish and fretful]. If their desires are not met with on the moment, they break forth with a stream of abuse. Nothing pleases them. These outbreaks do not trouble the trainers with experience, for they understand the condition the men are in.

The condition included delusions and hallucinations. Riders wobbled and frequently fell. But the riders were often well paid, especially since more people came to watch them as their condition worsened. Promoters in New York paid Teddy Hale $5,000 when he won in 1896 and he won "like a ghost, his face as white as a corpse, his eyes no longer visible because they'd retreated into his skull," as one report had it.

An athletic contest in which participants "go queer" in their heads, and strain their powers until their faces become hideous with the tortures that rack them, is not sport. It is brutality. Days and weeks of recuperation will be needed to put the Garden racers in condition, and it is likely that some of them will never recover from the strain.[1]

Alarmed, New York and Illinois ruled in 1898 that no competitor could race for more than 12 hours a day. The promoter of the event at Madison Square Garden, reluctant to close his stadium for half the day, realised that giving each rider a partner with whom he could share the racing meant the race could still go on 24 hours a day but that no one rider would exceed the 12-hour limit. Speeds rose, distances grew, crowds increased, money poured in. Where Charlie Miller rode 2,088 miles alone, the Australian Alf Goullet and a decent partner could ride 2,790.

Madison Cottage on the site of the Fifth Avenue Hotel at Madison Square, NYC, 1852

A lodge had been built three years after James Madison's death in a critical spot at the then-northernmost departure and arrival point in New York City — and named Madison Cottage in honor of the recently deceased fourth president. The site of Madison Cottage would remain a critical crossroads throughout the city's history — after its demise the site gave rise to a park, in turn named Madison Square,[2] which remains today. Madison Square in turn, gave rise to the names of Madison Avenue and Madison Square Garden, the latter taking the name of its original location: adjacent to Madison Square. The race that would become known as the "Madison" was developed at the second Madison Square Garden, which stood on the site of the original garden. Both gardens were prominent cycling venues, which gave rise to the track cycle racing that ultimately carried their name — and thereby became an indirect tribute to James Madison.

The madison is a conventional race but, since the innovation in New York, with riders in each team riding part of the distance, handing over to the other member, resting, and then returning to the race. Teams are usually of two riders but occasionally of three. Only one of the team is racing at any time and the replacement rider has to be touched before he can take over. The touch can also be a push, often on the shorts, or one rider hurling the other into the race by a hand-sling.

How long each rider stays in the race is for each team to decide. Originally, riders took stints of a couple of hours or more and the resting rider went off for a sleep or a meal. That was easier in earlier six-day races because hours could pass without riders attempting to speed away from the others. As races became more intensive, both riders from the team began riding on the track at the same time, one going fast on the short line around the bottom of the track and the other idling higher up until his turn comes to take over. Modern six-days last less than 12 hours a day and the madison is now only a featured part, so staying on the track throughout is more feasible.

The aim of each team is to ride more laps than any of the others. Tied positions are split by points awarded for placings at a series of sprints at intervals during the race.

The madison is a feature of six-day races, but it can also be a separate race, as in the Olympic Games. It has its own championships and specialist riders. A madison typically lasts between 30 and 60 minutes, but can take up to 90 minutes. The madison was a Summer Olympic event for men from 2000-2008, but was dropped ahead of the 2012 London Olympics.[3]

The official rules of the madison, traditionally regarded as being hard to follow, are stated as follows by British Cycling, the British Governing Body of Cycling:[4]