Magnoliopsida is a valid botanical name for a class of flowering plants. By definition the class will include the family Magnoliaceae, but its circumscription can otherwise vary, being more inclusive or less inclusive depending upon the classification system being discussed. 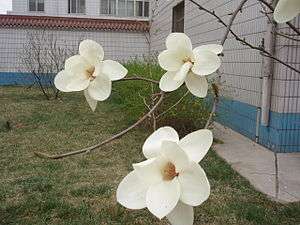 In the Takhtajan system and the Cronquist system the name was used for the group known as dicotyledons.

Magnoliopsida in the Takhtajan system

Magnoliopsida in the Cronquist system

The Cronquist system used this internal taxonomy (in the 1981 version):

The Dahlgren system and the Thorne system (1992) used the name Magnoliopsida for the flowering plants (angiosperms). However, the Cronquist system has been very popular and there have been many versions of the system published. In some of these Cronquist-based systems the name Magnoliopsida (at the rank of class) refers to the flowering plants (the angiosperms).

The Reveal system used the name Magnoliopsida for a group of the primitive dicotyledons, corresponding to about half of the plants in the magnoliids:

In the APG and APG II systems botanical names are used only at the rank of order and below. Above the rank of order, these systems use their own names, such as angiosperms, eudicots, monocots, rosids, etc. These names refer to clades (unranked). This class Magnoliopsida is not defined. Note that the idea that dicotyledons could be a taxonomic unit and get a formal name is rejected by the APG: the dicots are considered to be paraphyletic.