The Malatestiana Library (Italian: Biblioteca Malatestiana), also known as the Malatesta Novello Library, is a public library in Cesena, Emilia-Romagna (Italy). It was the first European civic library, i.e. belonging to the Commune, rather than the church, and open to the public.

The building and creation of the library was commissioned by the Lord of Cesena, Malatesta Novello. Construction was directed by Matteo Nuti from Fano (a pupil of Leon Battista Alberti) and lasted from 1447 to 1452. At Novello's direction, the books were owned by the commune of Cesena, not the monastery or the family.[1] Because of this governing structure, the collection was not dispersed like many monastic libraries.[2]

In 2005 UNESCO included the Library in the Memory of the World Programme Register.[3] 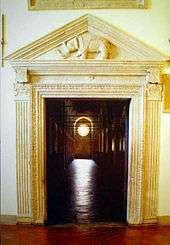 The Malatestiana Library is the only one in the world, of the type called humanistic-conventual, which has preserved structure, fittings and codexes since its opening for more than 550 years. The main doorway was the work of Agostino di Duccio (1418-1481). The wonderful walnut door dates back to 1454 and was carved by Cristoforo da San Giovanni in Persiceto.

Inside, the library shows its geometric design, typical of the early Italian Renaissance. The aula has a basilical shape ("temple of culture"), with three naves which are divided by ten rows of white, local stone columns; the campates are eleven for each aisle, pole vaulted. The central nave is barrel vaulted and ends with a rose under which is the gravestone of Malatesta Novello.

The fittings are composed of 58 desks, with coat of arms at the sides. The light comes in through the 44 Venetian style windows, which were perfectly designed for reading.

The library has over 400,000 books, including over 340 codexes covering various fields such as religion, Greek and Latin classics, sciences and medicine, and 3200 16th century manuscripts.[2] The oldest manuscript in the library is a copy of Isidore's Etymologiae.[4]