It is one of the successful teams in Southeast Asia along with Indonesia, Singapore, Thailand and Vietnam, winning bronze at the Asian Games in 1974 as well winning the ASEAN Football Championship in 2010 and other small competitions while improving at the same time.

In the FIFA World Rankings, Malaysia's highest standing was in the first release of the figures, in August 1993, at 75th. Malaysia's main rival on the international stage are their geographical neighbours, Indonesia and Singapore, and past matches between these two teams have produced much drama.

The Harimau Malaya name have been inherited from the Malaya national football team (which derived from Malayan tiger). Although the Federation of Malaysia have been formed in 16 September 1963, the name are still being maintained for the national squad, thus there is some debate as most Malaysian in the East felt the "Malaya" term does not cover the whole country.[5] Another source stated the name was believed to have been derived from a Malayan football player from Stulang Laut, Johor named Abdullah Mohd Don (Dollah Don)[6] after he been called as "Harimau Malaya" by the founding father of Indonesia, Sukarno when managed to chasing his team lost of 0–3 against an Indonesian football club by scoring hat-trick in a match between Singaporean Malay Club and Peseja (Persija Jakarta) in 1953.[7] On 2 February 2016, the nickname was officially changed to Harimau Malaysia.[1]

Most supporters in the East felt offended when the media in the West Malaysia keep continuously using the term even some in the West said it is just a small matter and the naming issue had been politicised, but for the people in the East it contradicts the aspirations and the spirit of 1Malaysia.[8][9] Most also has upset and disappointed as if the national team lose, the team will started to be called as Malaysian tiger, but if the national team won they will be only called as Malayan tiger.[10] Thus from 2 February 2016 onward, the nickname Harimau Malaya was officially changed to Harimau Malaysia in a bid to be more inclusive especially to the East Malaysian sides. The Football Association of Malaysia (FAM) president Tengku Abdullah said in a statement that:[1]

Before the establishment of Malaysia on 16 September 1963, North Borneo (now Sabah), Sarawak, Malaya and Singapore are represented by their own national teams, a situation which pre-dated the establishment of a Malaysia.[12] Malaya and Singapore usually competed in an international competition such as the Merdeka Tournament while North Borneo and Sarawak competed in Borneo Cup. Malaya's biggest achievement in football was becoming the bronze medalist of the 1962 Asian Games held in Jakarta, Indonesia after defeating South Vietnam 4–1. 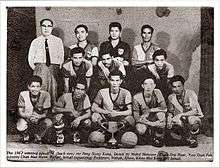 The winner of the first season of Borneo Cup in 1962, North Borneo football team, one year before the merger to form Malaysia.

The beginning of Malaysia football team match took place in Merdeka Stadium on 8 August 1963 with the combined strength of Singapore and Malaya (although the federation was only existed after 16 September 1963). With the combined forces of Malaya and Singapore, the team start their match with Japan, thought lost 3–4.[13] The team continued to use combination of players from Singapore and Malay Peninsula until the formation of the Malaysian Federation and ended when Singapore's separated from Malaysia in 1965. Since then the squad was only represented by West Malaysian players, mainly due to difficulties of that time to travel to East Malaysia and the players were not well known to mainstream West Malaysian football. It was only in 1977; when the FAM sent a talent scout to the East.[14][15] In 1971, James Wong of Sabah is the first player from East Malaysia to represent the country.[16] The list continued by the late James Yaakub of Sarawak in 1977.

Malaysia qualified for the 1972 Olympics in Munich, beating Japan, South Korea, Taiwan and Philippines along the way. Although they managed to defeat the United States 3–0, they lost the other 2 matches with a score of 3–0 to West Germany and 6–0 to Morocco. Two years later, Malaysia won their second bronze medal at the 1974 Asian Games after defeating North Korea 2–1. The team went on to qualify twice in a row for the AFC Asian Cup, in 1976 and 1980. Malaysia qualified again for the 1980 Olympics in Moscow, but joined the boycott of the games. The team also won the Merdeka Tournament three times, became runner-up four times and achieved third place twice during the 1970s.

From 1972, Mokhtar Dahari is considered as the legend footballer for the Malaysian team as he booked his place as one of the best players in Asia.[3] He manage to score 175 goals, of which the 175 goals for Selangor FA, 20 goals in 13 appearances for Kwong Yik Bank and another 125 goals for the national team, giving a total of 320 goals in his career.[17][18] However, the FIFA, Asian Football Confederation (AFC) and IFFHS denied the result as there is no evidence for the claim, and said the player only scored 5 goals in 20 matches. The FIFA also said "the highest record for the Malaysian team is only having score approximately 110 goals in international matches from 1972 until 1985, but it is still not possible for the player to score 175 goals". Therefore, Mokhtar Dahari is not recognised by FIFA to be the top scorer in Asian football.

In 1994, Malaysian football was embroiled in one of the largest bribery scandals in the country. With the dearth of mainstream interest and lack of funds, Malaysian football has failed to repeat the achievements of the 1970s and 1980s, despite the recruitment of Claude LeRoy. Harris came with strong credentials, having assisted Terry Venables at FC Barcelona and Allan Harris as coaches.

In the second half of 2004, FAM selected Bertalan Bicskei, former Hungarian goalkeeper and national coach, to succeed Allan Harris. Bicskei led the national side to third place at the regional Tiger Cup tournament, but was demoted to youth development duties by FAM for his actions during a friendly against Singapore in Penang on 8 June 2005. Bicskei, disgusted by the standard of officiating, threw a bottle onto the pitch before confronting a Singapore player. In September 2005, his contract was terminated after a mutual agreement.[19] Norizan Bakar became the next head coach of the Malaysian team. He guided the Malaysian squad to the ASEAN Cup semifinals in 2007, where Malaysia lost through penalties to Singapore. Norizan's position as the head coach was criticised by the Malaysian football community, fans and officials alike, after the team's performances during the 2007 AFC Asian Cup, where Malaysia lost to China 1–5, Uzbekistan 0–5 and Iran 0–2.

After the removal of Norizan Bakar, B. Sathianathan took over as head coach. Although he guided the squad to win the 2007 Merdeka Tournament, Malaysia once again failed to qualify for the World Cup after losing 4–1 and drawing 0–0 with Bahrain in the qualifying round. In March 2008, Sathianathan once again reach the final of the Merdeka Tournament. However, Malaysia lost on penalties to Vietnam. Sathianathan also led Malaysia to the semi finals of the 2008 Myanmar Grand Royal Challenge Cup. However, Malaysia then shockingly lost 4–1 to eventual winners, Myanmar.[20] During the 2008 AFF Championship, Malaysia started their campaign with a 3–0 win over Laos, but were defeated in the second match by Vietnam with a score of 2–3 and were finally eliminated when they lost 3–0 to Thailand in the final match of the group stage. This was the first time that the Malaysian squad had not passed through the group stages in 12 years.

In the 2011 Asian Cup qualifiers, the Malaysian team lost 0–5 to the United Arab Emirates. This defeat was the final straw in the eyes of Malaysian supporters, and in February 2009, the contracts of Sathianathan and manager Soh Chin Aun were terminated.[21] Former U-20 Malaysia and Selangor FA coach, Datuk K. Rajagopal was selected as the new head coach for Malaysia. He took over in July 2009. 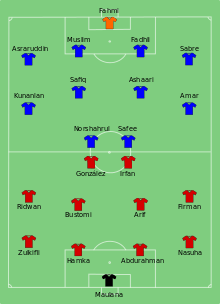 During the 2010 AFF Championship, Malaysia had 14 players that were under the age of 23 while the other players were over 23. Malaysia were in group A with host Indonesia, Thailand and qualifiers winner, Laos. Malaysia began their campaign with an embarrassing 5–1 loss to Indonesia. Malaysia bounced back from their defeat and later drew with Thailand and beat Laos 5–1. As runner up of group, Malaysia qualified for the semi finals to meet Group B winners and defending champions Vietnam. In the first leg of the semifinal, Malaysia won 2–0 on home soil and later drew 0–0 in the second leg, advancing to the final with an aggregate of 2–0.[26] In the finals, Malaysia met favourites Indonesia, who were unbeaten in all their matches.

On the first leg of the finals, Malaysia won 3–0 at home. Malaysia scored twice through Safee Sali and once through Mohd Ashaari Shamsuddin on a night when Bukit Jalil National Stadium was filled over capacity for the first time since it was built. The match attracted so many people that after tickets were sold out, policemen manning the gates were seen allowing friends and relatives into the stadium, causing people having to trespass onto the cable bridge above the electronic display besides standing on the aisles and corridors to view the game. On the second leg of the finals that was held in Jakarta, Malaysia lost 2–1 to Indonesia but the final aggregate was 4–2 to Malaysia, thus Malaysia were awarded the title. It was the first time in history that Malaysia were crowned the champions of ASEAN (AFF Championship Champions) and a trophy in the international stage.[27]

In November 2010, Nike Malaysia created a new football kit for the Malaysians specially made for the 2010 AFF Suzuki Cup. The home kit's design of black and yellow stripes is shaped by a black row of lines. The away kit features a plain blue front and red and white at the edge of the sleeves. Nike used the Malaysian flag as their logo instead of putting the Football Association of Malaysia logo to remembering the team success in the 1970s.[28] On the underside of the flag, the quote "Tanah Tumpahnya Darahku" (The land that I spill my blood for) can be found. The quote is part of the Malaysia National Anthem, alluding that they are doing their best for the country.

Wisma FAM is a training facility and the main headquarters for the Football Association of Malaysia which located at Kelana Jaya, Malaysia. The facility is founded by the association with a purpose to serve as a headquarters and also as a training ground for the national team. Others than that, it serves as a meeting point, a room for press statement and small apartment rooms available for the national players. Sometimes, ticket matches also sold on this training facility.

Malaysia home matches and some away matches (depending on the location and the broadcast station) are shown live or delayed on Astro Arena, RTM and Media Prima. All matches are broadcast with in full Malaysian commentary.[29]

According to the website of Football Association of Malaysia, Malaysia main sponsors include Nike, Bank Islam, 100plus, Telekom Malaysia and One Goal.[30]

Malaysia's home stadium is the Bukit Jalil National Stadium. The stadium capacity is 87,411 (seated)[31] which makes it the third largest football stadium in the world. Malaysia's previous national stadium was the Merdeka Stadium before the Bukit Jalil sports complex was constructed. Malaysia also uses other stadiums for their matches such as the KLFA Stadium, the MBPJ Stadium , the Shah Alam Stadium, and Larkin Stadium .

Since 2002, the tournament has been restricted to squads with no more than 3 players over the age of 23, and these matches are not regarded as part of the national team's record, nor are caps awarded.