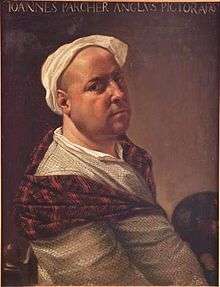 Marco Benefial (25 April 1684 – 9 April 1764)[1] was an Italian, proto-Neoclassical painter, mainly active in Rome. Benefial is best known for his repudiation of 18th century decorative Rococo styles pre-eminent in the Rome dominated by Carlo Maratta pupils. His paintings portrayed tangible human figures, with complex treatment of space, and luminous, warm colors.[1] Along with the altarpieces and frescoes, he also painted many portraits.[1] Because he partnered with some inferior artists who subsequently received credit, some of his paintings have been frequently misidentified.[1]

When at the age of 19 years, one of his paintings, an altarpiece with Apotheosis of San Filippo Neri, was rejected for exhibition at the yearly Pantheon show in 1703, Benefial became incensed and displayed it in a pharmacist's window,[1] to much commotion. In 1720, he protested the Accademia di San Luca's decree that only members or those meeting the approval of the painter's guild could teach drawing. The decree also required students to provide the academy with a fee equal to a pound of wax. His appeal to the councils of Pope Clement XI succeeded in having the ruling revoked.[1][2] After Benefial was finally elected into the Accademia di San Luca at the age of 57, he soon denounced its members' mediocrity and ignorance; and was expelled years later in 1755.[1]

His initial training in Rome was under Bonaventura Lambert, a pupil of Carlo Cignani, and he helped in the painting of the Chapel of the Sacrament in Saint Peter's Basilica and in the Carmelite Convent of San Alberto.

He is remembered for urging a return to the classical foundations of Italian painting, as exemplified by Raphael, del Sarto, and Carracci. Among his pupils were Anton Raphael Mengs, Antonio Liozzi, Giovanni Battista Ponfredi,[3] Gioacchino Martorana, and Mariano Rossi.