Margaret Livingston (November 25, 1895 – December 13, 1984) was an American film actress, most notable for her work during the silent film era. She was sometimes credited as Marguerite Livingston or Margaret Livingstone. She remains best known today as "the Woman from the City" in F.W. Murnau's 1927 masterpiece Sunrise: A Song of Two Humans.

The younger Livingston made her debut in silent film in 1916. She made over 50 films during the "silent era," most notably in F.W. Murnau's Sunrise: A Song of Two Humans, and a further 20 films after she successfully made the transition to sound film in 1929, including Smart Money starring Edward G. Robinson and James Cagney. She occasionally dubbed voices for some other actresses, including Louise Brooks for The Canary Murder Case (1929).

In 1931 she married the band leader Paul Whiteman, and retired from film acting in 1934.

Livingston was a guest on William Randolph Hearst's yacht the Oneida during the weekend in November 1924 with film director and producer Thomas Ince who later died of heart failure. In the Peter Bogdanovich film The Cat's Meow (2001), Livingston, played by Claudia Harrison, is depicted as having an affair with Ince at the time of his death. 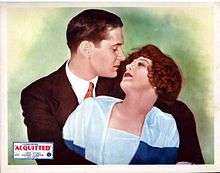 Lobby card for the 1929 film Acquitted