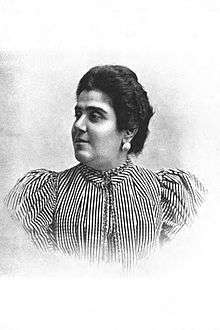 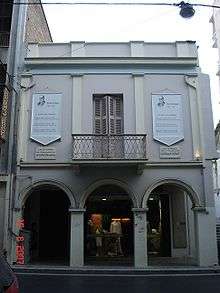 The house in Patras where Matilde Serao and Kostis Palamas were born. 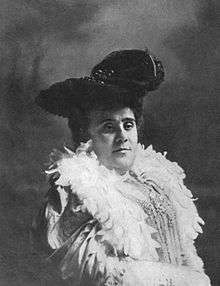 Matilde Serao (Italian pronunciation: [maˈtilde seˈraːo]; March 7, 1856 – 25 July 1927) was a Greek-born Italian journalist and novelist. She was the founder and editor of Il Mattino, and she also wrote several novels.

Matilde was born in the Greek city of Patras to an Italian father, Francesco Serao, and a Greek mother, Paolina Borely.[1] Her father had emigrated to Greece from Naples for political reasons.

She worked as a schoolmistress in Naples, and later described those years of laborious poverty in the preface to a book of short stories called Leggende Napolitane (1881). She first gained renown as a result of the publishing of her Novelle in Il Piccolo, a newspaper of Rocco de Zerbi, and later by her first novel, Fantasia (1883), which definitely established her as a writer full of feeling and analytical subtlety.

She spent the years between 1880 and 1886 in Rome, where she published her next five volumes of short stories and novels, all dealing with ordinary Italian, and especially Roman, life, and distinguished by great accuracy of observation and depth of insight: Cuore infermo (1881), Fior di passione (1883), La conquista di Roma (1885), La Virtù di checchina (1884), and Piccole anime (1883).

With her husband, Edoardo Scarfoglio, she founded Il Corriere di Roma, the first Italian attempt to model a daily journal along the lines of the Parisian press. The paper was short lived, and after its demise Serao established herself in Naples where she edited Il Corriere di Napoli. In 1892 she co-founded Il Mattino with her husband, which became the most important and most widely read daily paper of southern Italy. She established and ran her own newspaper, "Il Giorno" in 1904 until her death. The stress of a journalistic career in no way limited her literary activity; between 1890 and 1902 she produced Il paese di cuccagna, Il ventre di Napoli, Addio amore, All'erta sentinella, Castigo, La ballerina, Suor Giovanna della Croce, Paese di Gesù, novels in which the character of the people is rendered with sensitive power and sympathetic breadth of spirit. Most of these have been translated into English.