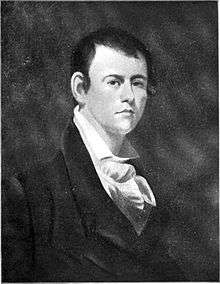 Jouett was the son of Sallie Robards and Jack Jouett, a hero of the American Revolution. The elder Jouett sent his son to Transylvania University and encouraged him to study law, but Matthew spent much of his time painting. The frustrated father commented "I sent Matthew to college to make a gentleman of him, and he has turned out to be nothing but a damned sign painter."

Jouett served as an volunteer officer of the 28th Kentucky Infantry in the War of 1812 and was among the survivors of the River Raisin Massacre. The company payroll of $6000 disappeared during the slaughter. Jouett restored the missing funds to the militia, based on his earnings as a painter. He also painted portraits of his fellow soldiers from memory, including Hart and Colonel Allen.[1]

Matthew Harris Jouett married Margaret "Peggy" Henderson Allen of Lexington, Kentucky on May 25,1812. They had nine children.[2] One of their sons was James Edward Jouett, a naval officer. James served with Admiral David Farragut and was immortalized in Farragut's famous quote "Damn the torpedoes! Four bells! Captain Drayton go ahead! Jouett full speed!"

Jouett was promoted to captain during the War of 1812. Afterwards, he studied portraiture and went to Boston to study with Gilbert Stuart in 1816. He painted in New Orleans from 1817 to 1827 during the winter season and was listed in the 1824 New Orleans Directory as a portrait painter working at 49 Canal Street.[3] 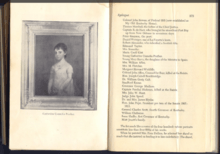 He was commissioned by the Kentucky legislature to paint a portrait of the Marquis de Lafayette. Jouett also painted Thomas Jefferson and the child Catherine Cornelia Prather. 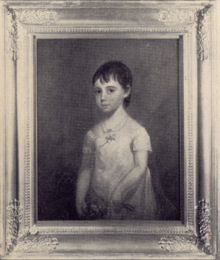 It wasn't until the 1893 Chicago World Fair, that his fame as a painter began. His paintings were greatly appreciated by the curators and the general public. His work is more collectible today than it was during his lifetime, and as such catches higher prices.[4] Jouett became one of the most highly esteemed portrait painters in the United States, honored with a major centenary exhibition at the Speed Museum in his home state.