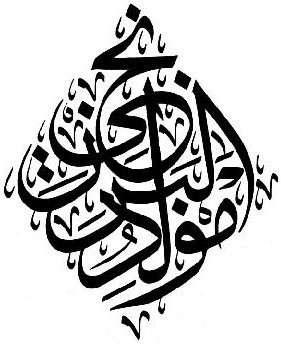 Calligraphy of the title adorning the cover of a recently released Arabic-English edition of Mawlid al-Barzanji in the UK.

Mawlid al-Barzanjī (مولد البرزنجي) is the popular name of one of the most important and universally accepted panegyrics of the Islamic prophet Muhammad in the Arabic vernacular. The complete title of the work is, “‘Iqd al-Jawhar fī Mawlid al-Nabiy al-Azhar (عقد الجوهر فى مولد النبي الأزهر) – The Jewelled Necklace of the Resplendent Prophet’s Birth”. It is work of the poet and Islamic jurist of the city of Medina Jaʿfar b. Ḥasan al-Barzanjī.

The work is highly revered and widely recited by Sunni Muslims around the world. In South East Asia and South Africa, the term “Barzanji” is synonymous with the word “Mawlid”, which is essentially a colourful celebration and spiritual display of deep love of the Prophet Muḥammad. This is done through poetic description of his blessed conception and birth, the miraculous exploits and significant events in his life, and description of his internal and external disposition. It is closed with a sublime supplication seeking the fulfilment of needs of the ephemeral world here and the pleasures of the everlasting abode in the Hereafter.

The work has a central place during the annual commemoration of the advent of Muḥammad which, according to majority consensus, was on the 12th day of the Islamic month of Rabī al-Awwal. In the Muslim households of Asia and Africa, it is also recited to solicit Divine blessings on special occasions such us the birth of a child, moving into a new house, opening of a new business, and even at the time of death - for the hallmark of a believer is to rejoice in God’s blessing (i.e. the birth of Muḥammad) than to lament a loss (of a loved one). It also serves to remind the believer that no loss is greater than the loss of Muḥammad. Yet, he continues to live in the hearts and minds of the faithful.

The work is the source of the popular refrain chanted in Mawlid gatherings around the globe:

O Allāh, perfume his noble grave / with the fragrant scent of blessings and peace O Allāh, honour, bestow peace, and shower blessings upon him and his family

The contents of the Mawlid al-Barzanjī in English is as follows :