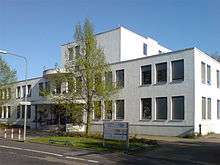 The Max Planck Institute for European Legal History (German: Max-Planck-Institut für europäische Rechtsgeschichte), situated in Frankfurt/Main, is one of 83 institutes and research facilities of the Max Planck Society (MPG). Since its foundation in 1964 researchers at the institute have been investigating the history of law in Europe and beyond.

Under Helmut Coing the research focus of the MPIeR was placed on the history of private law in Europe and its correlation to economic history. Dieter Simon, Walter Wilhelm, Michael Stolleis and Marie Theres Fögen gradually broadened the research scope of the institute to the theory and sociology of law, the history of public law, international law, criminal law, the law of modern Eastern Europe and the Europe of Dictatorship in the 20th century. Today, Thomas Duve and Stefan Vogenauer focus on the transnational approach to European Legal History by pursuing research in the fields of Global History and Comparative Law. The current research profile comprises four research areas which are Multinormativity, Translation, Legal Spaces and Conflict Regulation. In addition, 14 special research fields add to the institute's profile. These are Legal Historiography, Sources, History of Private Law, History of Criminal Law and Criminal Justice, Legal History of the Church, Regulating Regimes, History of Legal Methods and Practices, Legal History of the European Union, Legal Transfer in the Common Law World, Legal History of Ibero-America, Law as a Civilising Factor in the First Millennium, the Legal History of the School of Salamanca, Governance of the Universal Church after the Council of Trent as well as Law and Diversity. Areas of Expertise still present at the MPIeR are "Age and Law", "Kriminalbilder und Sicherheitsdiskurse im vormodernen Europa", "Communication and Representation of Law in (Pictorial) Media", "Confessionalism and the History of Church Law in the 19th and 20th Centuries", "The Europe of Dictatorships", "Gute Policey: Administrative Law and the science of public affairs", "History of International Law", "History of Private Law in the Modern Era", "Law in the Industrial Revolution", "Legal Cultures in Modern Eastern Europe", LOEWE Research Focus “Extrajudicial and Judicial Conflict Resolution”, LOEWE Junior Research Group “Canon Law, Moral Theology and Conflict Resolution in the Early Modern Period”, "Recht macht alt", "Rechtliche Aspekte konfessioneller Migration im neuzeitlichen Europa", "Rechtsgeschichte der Schule von Salamanca", "Scientific Communication in the 19th Century", "Scientific History of Public Law", "Venues Where Juridical and Economic Rationalities of Regulation Interact" and "Zur Ikonographie der Gesetzgebung".

The interdisciplinary research at the MPIeR, its specialised library with more than 440,000 media items, its publications and its numerous institutional and international cooperations offer a unique research environment for legal historians and other researchers worldwide. During the past fifty years the institute has turned into one of the central research hubs for the worldwide scientific community concerned with investigating our past and present national and transnational legal orders.

Collaboration in the Rhein-Main region, in particular with the Goethe University Frankfurt, plays an important role. Via the Cluster of Excellence entitled "The Formation of Normative Orders" or the Collaborative Research Center called "Discourses of weakness and Resource Regimes" the institute and the university jointly contribute to create a sustainable research site on normativity. Together they also established "The School of Salamanca" as long-term research project at the Academia of Science and Literature Mainz and thereby managed to combine research perspectives in the fields of legal history and philosophy.

Since 2002 the institute's journal Rechtsgeschichte appears annually in print (Klostermann Verlag) and is simultaneously available through open access since 2012. Its predecessors were IUS COMMUNE, journal for European legal history (1967-2001), and the Rechtshistorisches Journal (journal on legal history, 1982-2001). Research results of the institute are also published as working papers, pre-print editions or in a post-print format in the Legal History Research Paper Series, which has appeared online as SSRN since 2012. Beyond the journals, a number of book series reflect the work at the institute, i.e. Global Perspectives on Legal History, Studien zur europäischen Rechtsgeschichte, Studien zu Policey und Policeywissenschaft or methodica - Einführung in die rechtshistorische Forschung.

The MPI for European Legal History has two research departments and is currently managed by Stefan Vogenauer. In addition, a Max Planck Research Group works at the institute, headed by Benedetta Albani. Her group works on the "Governance of the Universal Church after the Council of Trent". Friends and supporters of the institute founded an association in 2003, which is called "Freunde des Frankfurter Max-Planck-Instituts für europäische Rechtsgeschichte e.V.".

The service facilities of the institute comprise the Administration (headed by Carola Schurzmann), the Library (headed by Sigrid Amedick), the Editorial Staff (headed by Karl-Heinz Lingens) and the IT-Management (headed by Volker Novak). Stefanie Rüther has been the research coordinator since 2015.