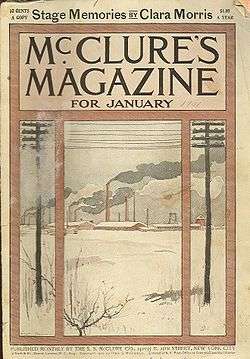 McClure's or McClure's Magazine (1893–1929) was an American illustrated monthly periodical popular at the turn of the 20th century.[1] The magazine is credited with having started the tradition of muckraking journalism (investigative, watchdog, or reform journalism), and helped shape the moral compass of the day.[2] [3]

At the beginning of the 20th century, its major competitors included Collier's and the Saturday Evening Post.

Examples of its work include Ida Tarbell's series in 1902 exposing the monopoly abuses of John D. Rockefeller's Standard Oil Company, and Ray Stannard Baker's earlier look at the United States Steel Corporation, which focused the public eye on the conduct of corporations. From January 1907 to June 1908, McClure's published the first detailed history of Christian Science and the story of its founder, Mary Baker Eddy (1821–1910) in 14 installments.[6] The articles were later published in book form as The Life of Mary Baker G. Eddy and the History of Christian Science (1909).[7]

In 1906, the writing staff defected over disputes with McClure and formed The American Magazine. McClure's began to lose readers and went into debt. S. S. McClure was forced to sell the magazine to creditors in 1911. It was re-styled as a women's magazine and ran inconsistently in this format, with publication from October 1921 to February 1922, September 1924 and April 1925, and February to May 1926. The later issues, from July 1928 until March 1929, were published under the name New McClure's Magazine. The last issue was in March 1929, after which the magazine was taken over by The Smart Set.[8]