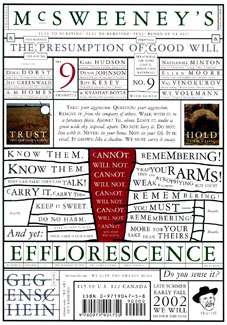 Cover of Issue 9 of Timothy McSweeney's Quarterly Concern, published in 2002.

McSweeney's Publishing is an American non-profit publishing house founded by editor Dave Eggers in 1998, headquartered in San Francisco. McSweeney's initially published only the literary journal Timothy McSweeney's Quarterly Concern, but has grown to publish novels, books of poetry, and other periodicals.

The recipient of dozens of awards for its contributions to literature and publishing, McSweeney's was named the country's seventh most innovative media company for 2012, "for proving the value of print publishing.".[1][2]

In December 2006, Advanced Marketing Services, which had been the parent company of McSweeney's distributor Publishers Group West (PGW) since 2002, declared bankruptcy. At the time of the filing, PGW owed McSweeney's about $600,000.[3] McSweeney's eventually accepted an offer from Perseus Books Group to take over distribution; the deal paid McSweeney's 70 percent of the money owed by PGW.[4] In June 2007, McSweeney's held a successful sale and eBay auction which helped make up the difference.[5]

McSweeney's has expanded its operations into partnerships with companies including eyewear one-for-one Warby Parker and accommodations marketplace Airbnb. The musician Beck has worked in tandem with Warby Parker and McSweeney's to design a custom pair of spectacles. In addition to its FastCompany award, McSweeney's has received "best of" awards and plaudits from SF Weekly and other several other publications.

The company's archives, including rare material from its founding and its early history, are held in the Harry Ransom Center at the University of Texas.[6]

In October 2014, founder Dave Eggers announced that McSweeney's will become a nonprofit and began asking for donations for several projects on its website. Eggers cited declining sales and increased opportunities for raising funds as reasons for McSweeney's long-discussed change to a nonprofit publishing house.[7]

Eggers says that when he was a child his family received letters addressed from someone named Timothy McSweeney, who claimed to be a relative of his mother. The name took on an aura of mystery. Eggers now claims that the real McSweeney is in care for mental illness, and his letters arrived as a result of confusion over the fact that Eggers' grandfather, who delivered Timothy at birth, and the McSweeney family, who adopted him, had the same name.[8][9]

In addition to a book list of approximately thirty titles a year, McSweeney's also publishes the quarterly literary journal, Timothy McSweeney's Quarterly Concern, the daily-updated literature and humor site McSweeney's Internet Tendency, and the bimonthly magazine The Believer. The quarterly food journal Lucky Peach and the sports journal Grantland Quarterly, in association with sports and pop culture website Grantland, were both established and incubated by McSweeney's. A quarterly DVD magazine, Wholphin, was decommissioned in 2012. The publishing house also runs four additional imprints: Believer Books; McSweeney's McMullens, a children's book department; McSweeney's Poetry Series, and the Collins Library, which reprints unusual titles. Version 2.0 of the McSweeney's iOS app was released in 2011; the Organist, a podcast produced by the editors of the Believer and KCRW, launched in 2012.

McSweeney's has helped launch the careers of dozens of emerging writers, such as Philipp Meyer, Wells Tower, and Rebecca Curtis; it has also published the works of well-established authors such as Michael Chabon, Stephen King, David Foster Wallace, George Saunders, Michael Ian Black, Nick Hornby, and Joyce Carol Oates. The house has also published the work of musicians, critics and artists including David Byrne and Beck. The band One Ring Zero gained notoriety by performing at early McSweeney's events in New York, and solicited lyric-writing assistance from McSweeney's contributors for the 2004 album, As Smart As We Are. McSweeney's was also the subject of the They Might Be Giants song "The Ballad of Timothy McSweeney."

These titles are typically compilations of McSweeney's works either from print or online sources. The publisher of the works is listed at the end.

These titles are releases of/by 826 Valencia. They are not the focus of this page, but these titles have been published by McSweeney's/826.