Mohammad Mozammel Huq (Mohammed Mozammel Huq, born 1860) was one of the greatest poets in Bengal. He was also a journalist by profession. He was born at Santipur or Shantipur, in the district of Nadia, West Bengal, India.[1]

His father’s name was Nasiruddin Ahmed. Mozammel Haque lost his father early and was then raised by his maternal grandfather in Shantipur. He was a brilliant student since his childhood and studied at Tamachika Bari English School and Santipur Municipal High School respectively. He began his journey as a journalist with the Calcutta Weekly Samay. He had been commissioner for Santipur Municipality for 40 years and had the post of Vice-Chairman for three years. Besides this, he was a member of the education committee of the Nodia District Board for 30 years and honorary Magistrate for 20 years. He was the vice-president of the Bangiyo Mussalman Sahityo Samiti (Bengal Muslim Literary Society). Here he met with legendary poet Kazi Nazrul Islam and grew a close friendship between them. Later he became a teacher of Santipur Junior Jubilee Madrasah in Santipur. When his son Sir Azizul Haque became minister of education for Bengal, he upgraded the madrasah to Santipur Muslim High School.

His poetic talent was evident from his childhood days. He was then regarded as a distinguished poet and writer of prose. Mozammel Haque wrote both prose and poetry. The Idea of Muslim Renaissance inspired his poetry. However, he excelled in writing prose that included biographies and novels. He also translated Persian writing Shahnama into Bengali in 1909. He composed the popular novel Johra in 1917. He was the secretary of Bangiya Mussalman Sahitya Patrika (1918) in which many of the writings of Kazi Nazrul Islam were published. His writings influenced the then vice-chancellor of Calcutta University Sir Ashutosh Mukherjee so much that he appointed him as an examiner of Bangla language in the Matriculation Examination of 1919. He continued on this post from 1919-1933. He was the editor and publisher of many monthly literary journal like – Moslem Bharat (1920), Lahari (1899), Mudgal, Santipur Dipika, Biswadoot, Yubak, Nawroj etc. He played a prominent role in fighting superstition, orthodoxy, backwardness and apathy in Muslim society. Bangiyo Sahitya Parishad conferred the title Kabya Kantha on him. Moslem Bharat was a non-communal journal. A message from Kabiguru, Rabindranath Tagore, appeared on the front page of the journal. Many eminent authors wrote through this journal. 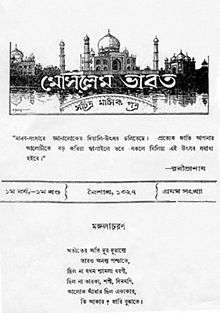 "Moslem Bharat" is a monthly literary journal. Its editor and executive editor were Md. Mozammel Haque and his son Afzalul Haque

Some of his notable poetic works are:

Some of his famous prose works are: