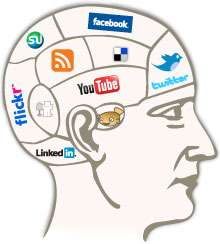 Media psychology is the branch of psychology that focuses on the relationships between human behavior and the media. This branch is a relatively new field of study because of advancement in technology. It uses various methods of critical analysis and investigation to develop a working model of a user's perception on media experience. These methods are used for society as a whole and on an individual basis. Media psychologists are able to perform activities that include consulting, design, and production in various media like television, video games, films, and news broadcasting. It is important to understand that media psychologists are not considered to be those who are featured in media (such counselors-psychotherapists, clinicians etc.) rather than those who research, work or contribute to the field.

The field of media psychology started in the 1950s when television was becoming popular in American households. The psychologists were concerned about the children and their television viewing. For example, researchers began to study the impact of television viewing on children's reading skills. Later, they began to study the impact of violent television viewing on children's behavior, for example if they were likely to exhibit anti-social behavior or to copy the violent behaviors that they were seeing. These events led up to the creation of a new division of the American Psychological Association in 1987. Division 46, the Media Psychology Division (now the APA Society for Media Psychology and Technology), is one of the fastest growing in the American Psychological Association. Today's media psychologists are concerned with the new media forms that have risen in recent years such as cellular phone technology, the internet, and new genres of television. Bernard Luskin established the first doctoral program of media psychology in the United States in 2003 at Fielding Graduate University.[1]

The concept of affective disposition theory is used to differentiate users' perspectives on different forms of media content and the differences within attentional focus.[2] The theory consists of four components that revolve around emotion: (1) media is based on an individual’s emotions and opinions towards characters, (2) media content is driven from enjoyment and appreciation from individuals, (3) individuals form feelings about characters that are either positive or negative and (4) media relies on conflicts between characters and how individuals react to the conflict.[3]

Simulation theory[4] argues that mental simulations do not fully exclude the external information that surrounds the user. Rather that the mediated stimuli are reshaped into imagery and memories of the user in order to run the simulation. It explains why the user is able to form these experiences without the use of technology, because it points to the relevance of construction and internal processing.[4]

The psychological theory of play applies a more general framework to the concept of media entertainment. This idea potentially offers a more conceptual connection that points to presence. The activity of playing exhibits consistent results to the use of entertainment objects. This theory states that play is a type of action that is characterized by three major aspects:[5]

The psychological theory of play is based upon the explanations given by eminent people such as Stephenson, Freud, Piaget, and Vygotsky. The theory is based on how an individual uses media for their satisfaction and how media changes within a person's life according to its contents. Play is used for pleasure and is self-contained. People are influenced my media both negatively and positively because we are able to relate to what we see within the environment. Through looking more in depth at the different forms of playing; it becomes apparent that the early versions of make believe play demonstrate the child's need for control and the desire to influence their current environment.

Major contributors to media psychology include Marshall McLuhan, Dolf Zillmann, Katz, Blumler and Gurevitch, David Giles, and Bernard Luskin. Marshall McLuhan is a Canadian communication philosopher who was active from the 1930s to the 1970s in the realm of Media Analysis and Technology. He was appointed by the President of the University of Toronto in 1963 to create a new Centre for Culture and Technology to study the psychological and social consequences of technologies and media. McLuhan's famous statement pertaining to media psychology was, "The medium is the message".[6] McLuhan's famous statement was suggestive towards the notion that media is inherently dangerous.[6] McLuhan's theory on media called "technological determinism" would pave the way for other people to study media.[6]

Dolf Zillmann advanced the two-factor model of emotion. The two-factor of emotion proposed that emotion involves both psychological and cognitive components.[6] Zillmann advanced the theory of "Excitation transfer" by establishing the explanation for the effects of violent media.[6] Zillmann's theory proposed the notion that viewer's are physiologically aroused when they watch aggressive scenes.[6] After watching an aggressive scene, an individual will become aggressive due to the arousal from the scene.

In 1974 Katz, Blumler, and Gurevitch used the uses and gratifications theory to explain media psychology. Katz, Blumler, and Gurevitch discovered five components of the theory; (1) the media competes with sources of satisfaction, (2) goals of mass media can be discovered through data and research, (3) media lies within the audience, (4) a audience is conceived as active, and (5) judgment of mass media should not be expressed until the audience has time to process the media and its content on their own.[7]

Pamela Rutledge[9] is the Director of the Media Psychology Research Center in Newport Beach, California, and a faculty member in the Media Psychology Department at Fielding Graduate University, According to her there is no clear definition, consensus, or career path for media psychology. Rutledge explains why with seven points:(1) the people that use it most are young, (2) technology is not going anywhere, (3) psychology studies all ages, (4) everyone uses it, (5) media and technology is everywhere, (6) everyone wonders if media is good or bad or both, and (7) older people worry about young people using and relying on it.

Media psychology will always be around due to media continuously evolving and adapting. Major contributors like Marshall McLuhan, David Giles and Bernard Luskin provided a foundation for the definition and application of media psychology on society. Media is an important part of society that appeals and will continue to appeal to the emotional aspect of human beings.