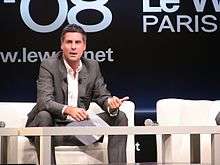 Meetic is an online dating service founded in November 2001. It became publicly quoted in October 2005. Meetic was founded by Marc Simoncini.[1]

According to JupiterResearch, Meetic is the largest online dating service in Europe. The service had 525,000 subscribers in 2007.[2] By February 2009, when the company acquired the European activities of Match.com, it grew to have more than 30 million subscribers.[3]

In December 2012, Meetic Group bought Massive Media, the parent company of Twoo.com.[6][7] Twoo features matchmaking algorithms that connect users to others based on location and interests. Users are spread worldwide, the site is available in 38 languages. Twoo is also available as an Android, iPhone and Windows Phone app.

In December 2013 the firm launched a new product: the Stepout application where people can find out who likes them nearby.

Reports of ethical and legal issues

TechCrunch reported accusations of Twoo forwarding invitations to its users' email contacts using spamming methods.[8] TechCrunch did a follow-up a year later and maintained that Twoo was still following the same spamming methods as it had reported the previous year.[9] Users of Spring.me, a social questions-and-answers service, were automatically migrated to Twoo's dating service, creating "shell accounts" for the dating site from their Q&A site accounts; this move, along with accusations of fake accounts, has raised ethical and legal questions about the company's conduct.[10][11]