This article is about the sculptor. For other uses, see Caffa (disambiguation).

Melchiorre Cafà (1636–1667), born Melchiorre Gafà and also known as Caffà, Gafa, Gaffar or Gafar,[lower-alpha 1] was a Maltese Baroque sculptor. Cafà began a promising career in Rome but this was cut short by his premature death following a work accident. He was the older brother of the sculptor Lorenzo Gafà. 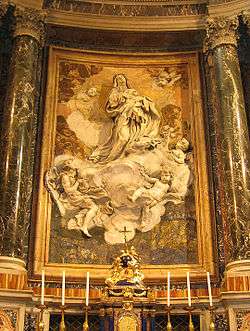 Cafà was born in Vittoriosa, Malta, and given the name Marcello at his baptism on 21 January 1636. After his move to Rome in 1658 or shortly after, he was most frequently referred to as Melchior (or Melchiorre) Maltese. His brother Lorenzo Gafà was one of the leading architects in Malta.

Cafà was already an accomplished sculptor when he came to Rome and entered the workshop of Ercole Ferrata, who was not strictly speaking his teacher although he probably helped him refining his technique. Despite soon attracting his own commissions, he stayed in close contact with Ferrata and collaborated with him.

In 1660 Cafà signed his first independent contract with Prince Camillo Pamphilj for the relief of the Martyrdom of Saint Eustace in Sant'Agnese in Agone. In 1662 he became a member of the Accademia di San Luca and was even elected its principal in 1667, but declined the honor. Reportedly, he was a close friend of the painter Giovanni Battista Gaulli. Cafà died on the 4 September 1667 after some material collapsed on him in the foundry of Saint Peter's while he was working on the altar decoration for Saint John's Co-Cathedral in Valletta.[lower-alpha 2]

There is no monument or plaque in his honour in his home city of Vittoriosa, Malta. However, the Maltese Post Office issued several stamps with Cafà's sculptures as motives.[1] 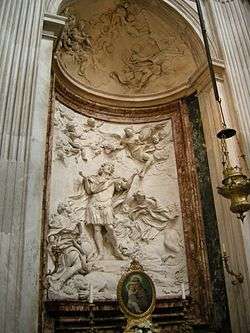 Extremely busy throughout his short life, he only managed to finish a few major commissions himself:

A number of Cafà terracottas are in the Hermitage Museum in St. Petersburg, the National Museum of Fine Arts in Valletta, the Museo di Palazzo Venezia in Rome, the Fogg Museum at Harvard University, Massachusetts, and the Museo di Roma. There are various wax reliefs and sculptures by Cafà in Malta: the Valletta Museum has sketches of martyrs, and models for the statues in the colonnade in Saint Peter's Square in Rome. And four reliefs were recently discovered in the Cathedral of Mdina representing the Nativity, the Adoration of the shepherds, the Annunciation and the Glory of St. Rose of Lima.[3]

Most unfinished works were completed by Ercole Ferrata, e.g.: