Michael Scott Hopkins is a colonel in the U.S. Air Force, and a current NASA astronaut.[1] Hopkins was selected in June 2009 as a member of the NASA Astronaut Group 20. He made his first spaceflight as a Flight Engineer on Soyuz TMA-10M/Expedition 37/Expedition 38, from September 2013 until March 2014. He is the first member of his class to fly in space.[2]

Michael Scott Hopkins was born on December 28, 1968 in Lebanon, Missouri but grew up on a farm in Richland, Missouri in a United Methodist family.[3] After graduating from the School of the Osage High School in Lake of the Ozarks, Missouri in 1987, he entered the University of Illinois at Urbana-Champaign. While there he played defensive back for the Illinois Fighting Illini football team.[4] He graduated in 1991 with a Bachelor of Science degree in Aerospace Engineering. He followed his undergraduate studies with a Master of Science degree in Aerospace Engineering from Stanford University, which he earned in 1992. 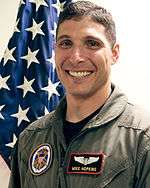 Mike Hopkins in flight suit while serving as special assistant to the Vice Chairman of the Joint Chiefs of Staff.

Hopkins was a member of Air Force ROTC while at the University of Illinois, where he was a distinguished graduate. After graduating with his bachelor's degree he was commissioned a Second Lieutenant in January 1992. Early in his career he was stationed at Kirtland Air Force Base in Albuquerque, New Mexico working on advanced space system technologies. In 1996 he attended the U.S. Air Force Test Pilot School as a flight test engineer. He graduated in class 96B as a Distinguished graduate and top flight test engineer. Following test pilot school he was assigned to the 418th Flight Test Squadron testing the C-17 and C-130 aircraft. In 1999 he was sent to Canada on an exchange program. While there he lived in Cold Lake, Alberta working with the Canadian Flight Test Center. In 2002 he was selected as an Olmsted Scholar by the George and Carol Olmsted Foundation and was sent to the Defense Language Institute in Monterey, California studying foreign language. After six months of language training he was sent to Parma, Italy studying political science at the Università degli Studi di Parma. In 2005, Hopkins was assigned to the U.S. Air Force Rapid Capabilities Project Office at the Pentagon where he was a project engineer and program manager. Following this assignment, in 2008 he was assigned as a special assistant to the Vice Chairman of the Joint Chiefs of Staff, General James Cartwright. He was working with the Joint Chiefs when he was assigned to be an astronaut candidate.[5]

Hopkins was selected by NASA and the U.S. Air Force to be an astronaut candidate and began training at the Johnson Space Center in Houston, Texas. After completing astronaut candidate training he was designated an astronaut. He launched on board the Soyuz TMA-10M spacecraft in September 25, 2013 alongside Russian cosmonauts Oleg Kotov and Sergey Ryazansky, which docked with the International Space Station (ISS) several hours later. Hopkins remained on board as a Flight Engineer on Expedition 37/Expedition 38 until March 10, 2014. During his time on the station, the crew conducted science experiments and maintenance.[2] While on board the ISS, Hopkins also took Holy Communion, after making special arrangements with James H. Kuczynski, the pastor of Mary Queen Catholic Church in Friendswood, Texas.[3]

Hopkins is married and has two sons.[6] In 2013, Hopkins, formerly a communicant in the Methodist Church, was received into the Catholic Church, joining his wife and his children who are Catholics.

This article incorporates public domain material from websites or documents of the National Aeronautics and Space Administration.