Michael Swanwick (born November 18, 1950) is an American science fiction author. Based in Philadelphia, Pennsylvania, he began publishing in the early 1980s.[1]

Michael Swanwick's fiction writing began with short stories, starting in 1980 when he published "Ginungagap" in TriQuarterly and "The Feast of St. Janis" in New Dimensions 11. Both stories were nominees for the Nebula Award for Best Short Story in 1981.[2] His published novels are In the Drift (an Ace Special, 1985), a look at the results of a more catastrophic Three Mile Island incident, which expands on his earlier short story "Mummer's Kiss". This was followed in 1987 by Vacuum Flowers (1987), an adventurous tour of an inhabited Solar System, where the people of Earth have been subsumed by a cybernetic mass-mind; Stations of the Tide (1991), the story of a bureaucrat's pursuit of a magician on a world soon to be altered by its 50-year tide swell; The Iron Dragon's Daughter (1993), a fantasy with elves in Armani suits and dragons as jet fighters; Jack Faust (1997), a retelling of the Faust legend with modern science and technology; Bones of the Earth (2002), a time-travel story involving dinosaurs; The Dragons of Babel (2008), which is set in the same fantasy world as The Iron Dragon's Daughter; and Dancing with Bears (2011), featuring the rogues Darger and Surplus (from a series of his short stories) adventuring in post-Utopian Russia.

His short fiction has been collected in Gravity's Angels (1991), Moon Dogs (2000), Tales of Old Earth (2000), Cigar-Box Faust and Other Miniatures (2003), The Dog Said Bow-Wow (2007), and The Best of Michael Swanwick (2008). A novella, Griffin's Egg, was published in book form in 1991 and is also collected in Moon Dogs. He has collaborated with other authors on several short works, including Gardner Dozois ("Ancestral Voices", "City of God", "Snow Job") and William Gibson ("Dogfight"). 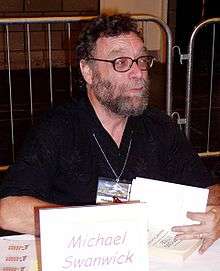 At the 63rd World Science Fiction Convention in Glasgow, August 2005

Swanwick has written about the field as well. He published two long essays on the state of the science fiction (The User's Guide to the Postmoderns, 1986) and fantasy ("In the Tradition...", 1994), the former of which was controversial for its categorization of new SF writers into "cyberpunk" and "literary humanist" camps. Both essays were collected together in The Postmodern Archipelago 1997. A book-length interview with Gardner Dozois, Being Gardner Dozois, was published in 2001. He is a prolific contributor to the New York Review of Science Fiction. Swanwick wrote a monograph on James Branch Cabell, "What Can Be Saved From the Wreckage?" which was published in 2007, and a short literary biography of Hope Mirrlees, Hope-in-the-Mist, which was published in 2009.

At the Avram Davidson tribute, NYC, 2007