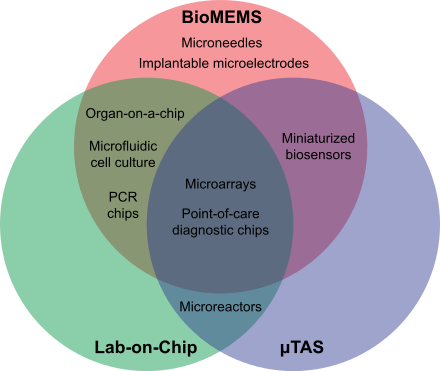 A Venn diagram outlining and contrasting some aspects of the fields of bio-MEMS, lab-on-a-chip, μTAS.

A microarray is a multiplex lab-on-a-chip. It is a 2D array on a solid substrate (usually a glass slide or silicon thin-film cell) that assays large amounts of biological material using high-throughput screening miniaturized, multiplexed and parallel processing and detection methods. The concept and methodology of microarrays was first introduced and illustrated in antibody microarrays (also referred to as antibody matrix) by Tse Wen Chang in 1983 in a scientific publication[1] and a series of patents.[2] The "gene chip" industry started to grow significantly after the 1995 Science Paper by the Ron Davis and Pat Brown labs at Stanford University.[3] With the establishment of companies, such as Affymetrix, Agilent, Applied Microarrays, Arrayit, Illumina, and others, the technology of DNA microarrays has become the most sophisticated and the most widely used, while the use of protein, peptide and carbohydrate microarrays[4] is expanding.

Types of microarrays include:

People in the field of CMOS biotechnology are developing new kinds of microarrays. Once fed magnetic nanoparticles, individual cells can be moved independently and simultaneously on a microarray of magnetic coils. A microarray of nuclear magnetic resonance microcoils is under development.[5]