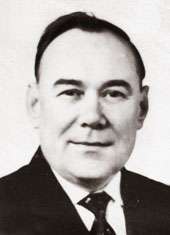 In 1931 he graduated from the Samara Electro-Technical School and went on to work in the Chief Inspectorate of the Samara Energy Plant from 1931—1933. After serving in the Red Army from 1993—1934, he studied at the Kuybyshev Industrial Institute from 1938—1941.[1]

From 1943 to 1951 he served in various positions of the Kuybyshev Regional Committee of the All-Union Communist Party (bolsheviks), and served as First Secretary of the same Committee from October 1952 to December 1959.[1]

In 1971 he was accorded the diplomatic rank of Ambassador Extraordinary and Plenipotentiary, and his first diplomatic posting came when he was presented his Letter of Credence in East Berlin on 30 October 1971 as the Ambassador of the Soviet Union to East Germany. He was Ambassador to East Germany until 7 March 1975, when on 10 March 1975 he began his next posting as Ambassador of the Soviet Union to Austria. He served as Soviet ambassador in Vienna until his retirement on 26 October 1986.[1]