Milne Bay is a large bay in Milne Bay Province, south-eastern Papua New Guinea. More than 35 kilometers long and over 15 kilometers wide, Milne Bay is a sheltered deep-water harbour, surrounded by the heavily wooded Stirling Range to the north and south, and on the northern shore, a narrow coastal strip, soggy with sago and mangrove swamps.[1] The bay is named after Sir Alexander Milne. 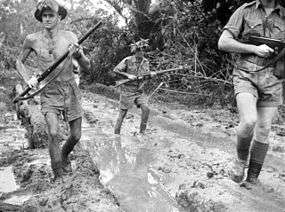 During World War II, the area was the site of the Battle of Milne Bay in 1942 and by late 1943 it became the major support base for the New Guinea campaign through the development of Finschhafen as an advanced base after that area was secured in the Huon Peninsula campaign. By January 1944 about 140 vessels were in harbor due to congestion at the facilities. Congestion was relieved by opening of a port at Finschhafen and extensive improvements at Milne Bay.[4] Malaria was a major problem in New Guinea and Milne Bay was particularly hard hit with incidents of the disease hitting at a rate of 4,000 cases per 1,000 troops per year and estimated 12,000 man-days a month lost time.[5]